Sexual differentiation and the menstrual cycle

The sexual system differs from any other system of the organism because its main function is to ensure the survival of the entire species by generating offspring.

After conception, during the first weeks of gestation, the sex of the organism is not yet distinguishable, even though it possesses rudimentary male and female reproductive systems, respectively called Wolff's scholars is Müller's scholars. From these systems originate the reproductive organs except the external genitalia and gonads, ie ovaries for females and testes for males.

Later, during fetal development, the appearance of the gonads will mark the transition to the development of the external genitalia and other sexual characteristics. Whether these characteristics are male or female depends on the presence or absence of the androgen hormone testosterone secreted by the male gonads: the testes. If this hormone is present, the fetus develops as a male; if the hormone is absent, the fetus develops as a female.

Living beings are not born with the ability to reproduce, but acquire it during sexual development and maturation, which in man is identified as the period of puberty. This period generally begins between the ages of 10 and 14 and extends to mature age. Before puberty, the male and female gonads are unable to generate spermatozoa (the male gametes) or the egg cells (female gametes), moreover the outward appearance is that of a child, with small differences between boys and girls. During puberty, the reproductive organs mature, gametogenesis begins, and other physiological changes occur throughout the body. During this phase, males and females develop so-called secondary sexual characteristics, such as beard growth in males and widening of the hips in females.

Although both males and females acquire full reproductive function during puberty, the characteristics of reproductive activity are very different between the two sexes. The activity of the female reproductive system is characterized by cyclical hormonal and structural changes known as period, which lasts on average about a month (28 days), during which an egg cell is produced, while the male system does not undergo any cyclic variation, and normally produces millions of spermatozoa every day. Females produce a limited number of eggs during their lifetime and lose the ability to reproduce around the age of 45-50. This loss of reproductive capacity marks the beginning of a called period menopause. On the contrary, males maintain the ability to produce spermatozoa, and therefore the ability to reproduce throughout adult life.

How the female reproductive cycle works

First of all, the female reproductive system consists of a system of interconnected cavities that include the internal cavity of theuterus, the uterine fallopian tubes and the vagina, as shown in figure 1. 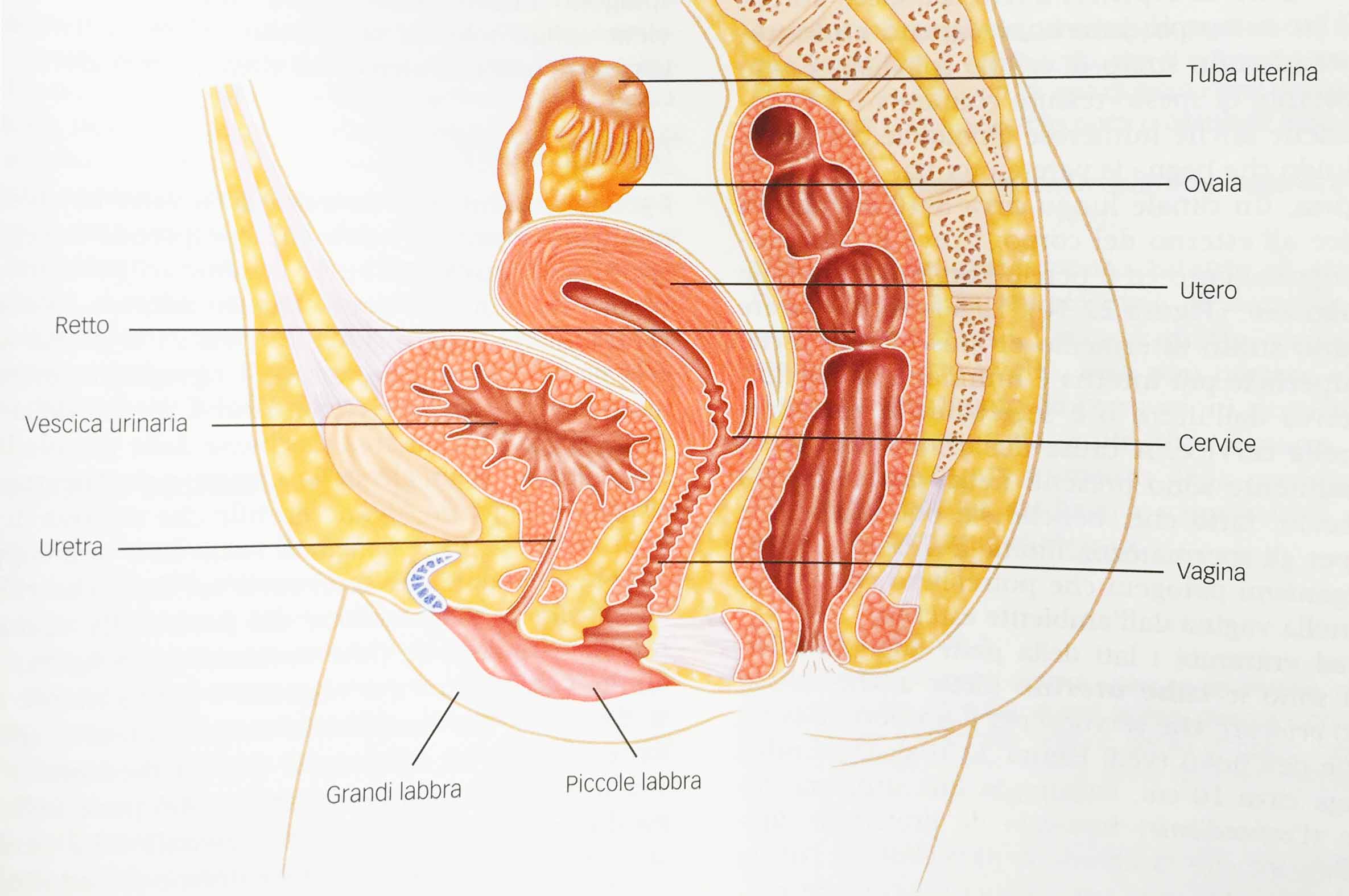 Not only the female sexual organs participate in the female reproductive cycle, but also the central nervous system, the hypothalamus and the pituitary gland. The end of the period, is to allow the maturation of an egg cell and the preparation of a tissue capable of receiving its implant in the event of fertilization.

Among the numerous changes that occur during the menstrual cycle, there are cyclical changes in the secretions of ovarian, hypothalamic and pituitary hormones, which, in turn, cause changes in ovarian functions and in the structure and function of the uterus.

The menstrual cycle is actually a very complex cycle consisting in turn of two further functional and structural changes with a cyclical trend called ovarian cycle is uterine cycle. 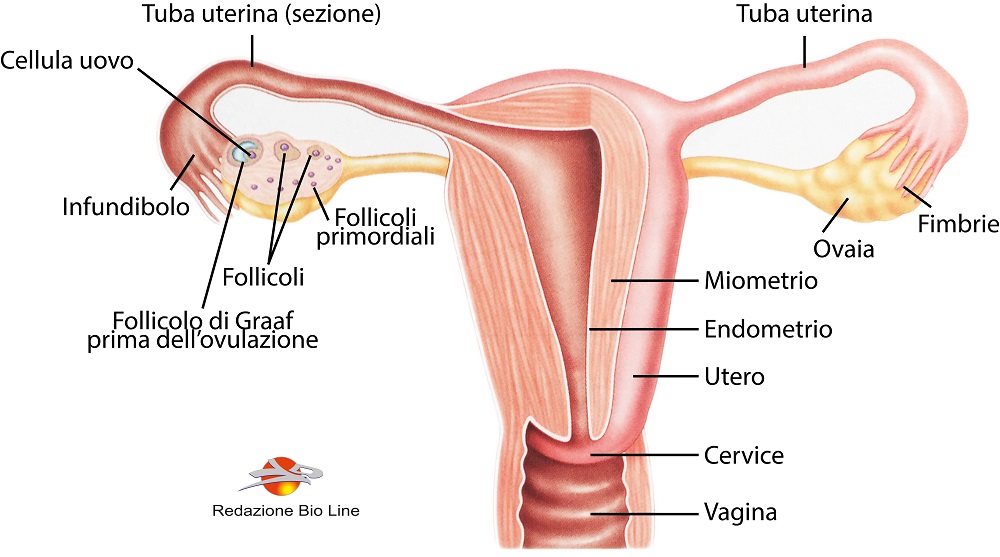 Fig. 2 - Female reproductive system. Frontal structure of the uterus and related structures and section of an ovary showing the ovarian follicles in the different stages of the ovarian cycle

Follicular phase: this phase takes place in the ovary, inside which there are several cells of the follicle, that is, silent primordial follicles that can potentially develop into mature egg cells and begins with the first day of menstruation.

The ovaries host a limited number of primordial follicles and, at each menstrual cycle, 20-30 follicles compete for development, of which only 1 reaches full maturity (or 2 of the follicles in the case of twin births that occur less than 2% ). The two ovaries work by producing the egg cell alternately.

The follicular phase defines the development stages of the primordial follicle, up to the phase in which the mature egg cell is released inside the uterine tube, waiting for a possible fertilization.

The growth and development of the follicle are stimulated by both the action of FSH (follicle stimulating hormone) that you give estrogensecreted by the follicle itself. During the follicular phase, the plasma levels of FSH gradually decrease, which causes the follicle to release estrogen. The selection of the dominant follicle depends on its ability to secrete sufficient amounts of estrogen in the face of falling FSH levels.

During the terminal stage of the follicular phase, the follicle matures and is called Graafian follicle, and on the 14th day from menstruation occurs theovulation, or the detachment of the egg cell itself from the follicle, and release of the same inside the uterine tubes.

After about 400 menstrual cycles, which occur during a woman's life, the available primordial follicles end and menopause ensues.

Luteal phase: ovulation therefore determines the beginning of the second phase, the luteal phase. The follicle, after it has released the egg cell, remains inside the ovary and turns into corpus luteum. The corpus luteum begins to secrete estrogen and progesterone, the female sex hormones. Both ovulation and the formation of the corpus luteum are triggered by the same event, namely the sudden increase in the plasma concentration of the hormone LH (luteinizing hormone). If the egg cell is not fertilized, the corpus luteum reaches its maximum activity 10 days after its formation, then begins to degenerate into a scar tissue called corpus albicans.

The degeneration of the corpus luteum causes a drop in estrogen and progesterone in the blood which causes menstruation, expulsion of the unfertilized egg cell and the beginning of the subsequent follicular phase. If the egg cell is fertilized, the corpus luteum does not degenerate and remains intact for the entire period of gestation. 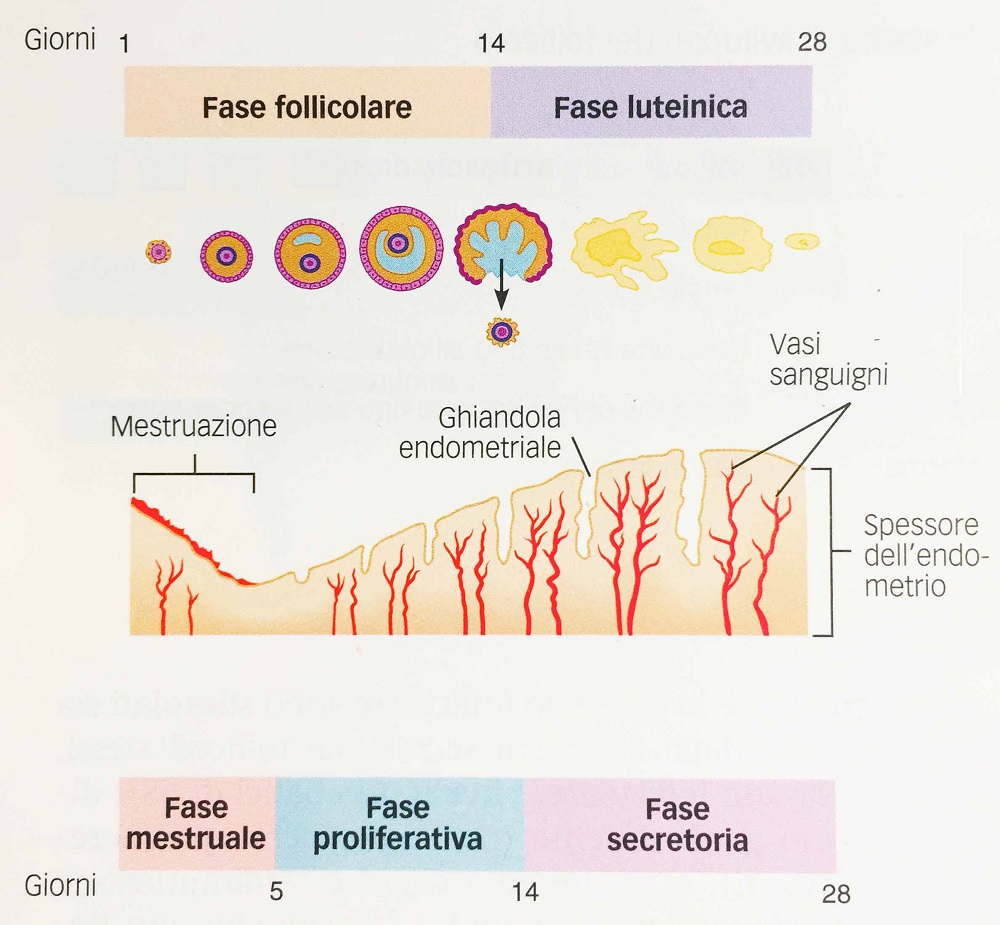 The uterine cycle, as mentioned, coincides with the ovarian cycle and is divided into three phases: the menstrual phase, the proliferative phase and the secretory phase.

Menstrual phase: begins on the first day of menstruation and lasts three to five days. It is so called because it corresponds to the period of menstruation, the peeling of the walls of the uterus. At the end of the luteal phase of the ovarian cycle, the drop in estrogen and progesterone caused by the degeneration of the corpus luteum determines the reduction of blood flow to the outermost tissue that lines the uterus. As a result this tissue dies and begins to separate from the more stable support tissues below, which remain intact. Dead tissue gradually peels off, causing blood vessels to rupture and bleed. Over the next few days, a mixture of blood and peeling tissue flows from the uterus to the vagina and exits the body, a phenomenon called menstrual flow.

Proliferative phase: with the end of the menstrual flow begins the proliferative phase. The uterus renews itself in preparation for a possible pregnancy. The outermost tissues of the uterus begin to grow, the glands enlarge and the blood vessels increase the flow of blood. In the cervical canal, the glands begin to secrete a thin mucus that wets the inner surface; if the spermatozoa were deposited in the vagina, this mucus would facilitate their migration into the uterus, a fundamental step for fertilization. The uterine changes that occur at this stage are promoted by estrogen, whose plasma levels increase due to the growth and increased secretory activity of the dominant follicle.

Secretory phase: this phase coincides with the luteal phase of the ovarian cycle. During this phase, the endometrium (mucous membrane that lines the internal cavity of the uterus), which was rebuilt during the proliferative phase, is transformed in such a way as to make it a favorable environment for implantation and the subsequent reception and nourishment of the embryo in development. The blood supply to the endometrium becomes greater as the arteries branch. The glands of the endometrium enlarge and begin to secrete fluids rich in glycogen, which the embryo uses during its first stages of growth as a source of energy.

The fluid secreted by the glands of the cervix becomes denser, forming a real plug that prevents bacteria from entering the uterus from the vagina. These uterine changes are promoted by the hormonal action of the progesterone, whose blood levels increase during the secretory phase, thanks to the action of the corpus luteum. Towards the end of the secretory phase, if fertilization does not occur, the corpus luteum degenerates, causing the levels of estrogen and progesterone in the plasma to drop. This decline leads to a decrease in the influences of sex hormones on promoting the growth of the endometrium that generates the menstruation events described above. With the onset of menstruation, the secretory phase ends, and a new menstrual phase begins. If fertilization and implantation have taken place, the corpus luteum does not degenerate and estrogen and progesterone levels remain elevated. As a result, the characteristics of the uterine environment of the secretory phase are maintained during pregnancy.