Glycidol and fatty acid esters: what they are and what dangers they hide

Glycidol and fatty acid esters: what they are

As you may have noticed, since September / October 2015, the claim "without palm oil, saturated fats and hydrogenated fats" is reported in most of the food products on supermarket shelves, as well as in advertisements. Palm oil and palm kernel oil in particular are the substances that have most attracted the attention of consumers; but what is the reason?

Palm oil, extracted from palm fruits, and palm kernel oil, derived from dried and ground palm seeds, contain a lot of saturated fatty acids and are commonly used by the food industry because they have a low cost and an optimal semi-solid consistency. particularly suitable for the preparation of packaged sweets and snacks, but also in the production of cosmetics and biofuels. The only risk associated with excessive consumption of saturated fat is the increase in "bad" LDL cholesterol, which predisposes to cardiovascular disease.

The extraction of this type of oil also constitutes an important ecological problem in Southeast Asia, raising problems for the conservation of forests and biodiversity, with consequent exploitation of the local population. Lately, some large multinationals are committed to using only oils from respectful crops dedicated exclusively to palm without implementing deforestation interventions.

Among these substances, already identified at the end of the 1970s in the production process of hydrolyzed vegetable proteins as flavor enhancers for packaged foods, include glycidol, present mainly in fats in the form of glycidyl esters (GE), 3-monochloropropanediol ( 3-MCDP), 2-monochloropropanediol (2-MCDP) and related fatty acid esters. In order for these substances to form, the food oils must be brought to temperatures above 200 ° C, which characterize the refining phase.

This treatment makes it possible to obtain an oil from raw materials such as the seeds or fruits of a plant; however, the various phases and the high temperatures degrade the organoleptic properties of the product, adding instead chemicals such as those described, which can represent a danger to the health of the final consumers.

The only advantage of this process, compared to a cold-pressed oil, is a higher smoke point: in fact, the oils processed in this way are suitable for frying or industrial food preparations. In any case, a refined oil is to be considered second choice. Refining takes place in 6 phases during which the seeds or fruits are treated with solvents to make them more palatable and less acidic; since the vitamins present are destroyed, the legislation allows the addition of antioxidant additives to protect the oil from rancidity.

Glycidol and fatty acid esters are therefore also present in many vegetable fats such as corn, peanuts, rapeseed, sunflower, margarine, baked confectionery, chocolate spreads, some ready-made sauces, sauces and baby food ; however, it has been found that palm and palm kernel oil, with the same processing technique and quantity of product, contain the highest percentage of it.

Following a request from the European Commission (EC), in March 2016, the internal committee of experts in food toxicology of EFSA (European Food Safety Authority) published the results of a study on health risks. related to GE, 3- and 2-MCDP. The data used to formulate the scientific opinion comes exclusively from in vitro tests and in vivo experiments conducted on laboratory animals since, as in the case of acrylamide, data on toxicity for humans are still scarce.

At very high concentrations, difficult to reach with daily nutrition, 3- and 2-MCDP, dissolved in the water of laboratory animals, are genotoxic or are able to alter the genetic heritage of cells causing the onset of tumors in several organs . In addition to these effects, the 3 substances also showed a toxic effect on the kidneys and destruction of the muscle layers and of the heart, with mechanisms still unknown.

Glycidol on the other hand, has already been included by IARC (International Agency for Cancer Research, not to be confused with AIRC, the Italian Association for Cancer Research) in group "2A" as a possible human carcinogen. The experts also concluded that there is sufficient evidence that glycidol and its esters (GE) are carcinogenic to humans of all age groups but safety levels have not yet been established.

According to research, the GEs after ingestion are converted to glycidol for which, being the latter considered a carcinogen and genotoxic, it was not possible for EFSA to establish a tolerable daily intake (or TDI). , but only an exposure margin of 0.4 micrograms / kg body weight per day.

For example, a 70kg person takes about 28.5 micrograms per day; 10g of palm oil contains an average of 39 micrograms of glycidol. The toxicological data available for 2-MCDP are still insufficient, therefore no threshold values have been formulated while, according to the latest update of 2018 of theEFSA, together with the expert committee on additives of United Nations FAO-WHO (JECFA), the tolerable daily dose of 3-MCDP is 2 micrograms / kg body weight per day.

At greatest risk of exposure to GE are children and infants who consume infant formula and infant formula as the threshold values may be exceeded, considering their lower body weight. Table 2 shows the foods tested for the content of food contaminants. 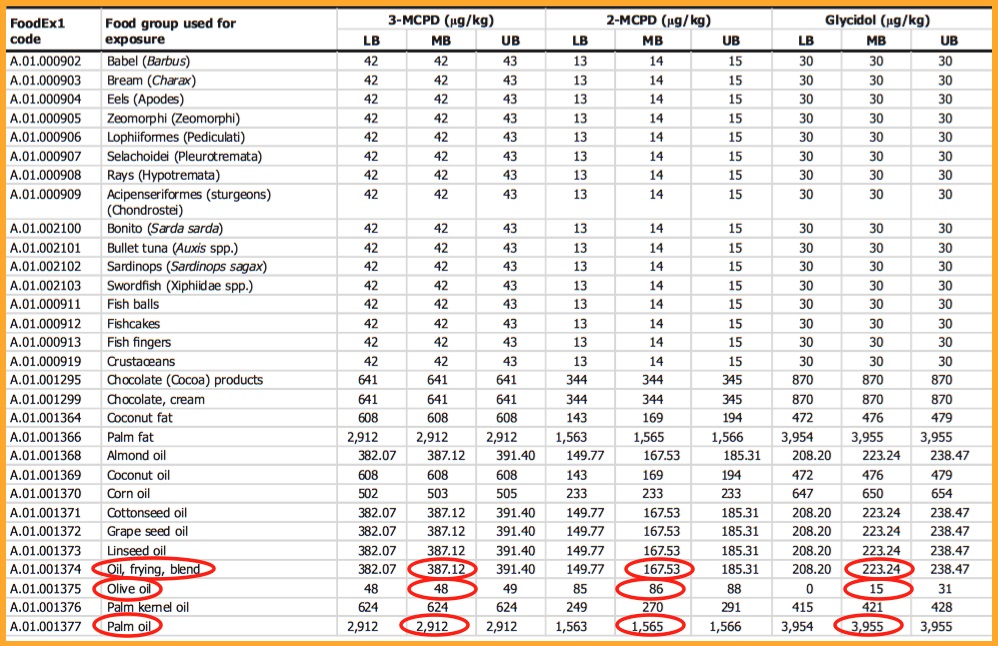 How to avoid or limit the consumption of glycidol, 3-MCDP and 2-MCDP

As for acrylamide, it is practically impossible to completely eliminate these compounds since there are many potentially carcinogenic substances (at very high concentrations) that are formed in the various processes, not only industrial but also in food. As EFSA experts point out, the risk is never zero and is linked to the frequency and quantity of consumption of foods containing glycidol and its derivatives; however, fortunately, in normal nutrition the risk does not appear very high. As in all aspects of daily life, to maintain one's health a correct and balanced diet is sufficient, avoiding the abuse and excessive consumption of processed and refined substances. Always in our favor, EFSA experts recorded a considerable decrease in palm and palm kernel oil from 2010 to 2015 precisely because the food industry has already implemented changes in production processes to avoid reaching the critical temperatures that lead to compound formation.

Following the EFSA reports, many food companies have withdrawn foods containing palm oil from the market, proposing new products that are now palm oil free. The recommendations to mitigate the consumption of glycidol and its derivatives is therefore to buy products that are free of refined oils, prefer the home use of top quality oils such as cold-pressed olive oil, use butter instead of margarine and limit the consumption of fried foods (thus also avoiding acrylamide). Whenever possible, prepare foods such as sweets and bakery products at home, using simple, fresh and quality ingredients. As for baby food, it is advisable to carefully choose the products and of fundamental importance for any food purchased at the supermarket is to read the label in order to identify the fats used in the production. As with acrylamide, an excellent way to defend against the attack of free radicals that are formed following the intake of harmful substances and which, in the long term, could damage our cells, is the daily use of antioxidants in the diet. Use foods rich in vitamins by introducing about 5 portions of fruit and vegetables throughout the day and, for a better intake, use supplements that contain a concentrate of beneficial substances, formulated for specific needs.