What are the Shiitake?

The Shiitake they are gods medicinal mushrooms, whose botanical name is Lentinula Edodes, and I'm mushrooms basidiomycetes belonging to the family of Omphalotaceae.

The Shiitake it is native to the Asian continent, from which it has spread all over the world. And I really emphasize all over the world, so much so that, to date, it is the second mushroom (obviously edible) most consumed ever.

Its origin is very ancient, just like its cultivation and use. There is written evidence of it in ancient Japanese documents dating back to before the year 200 and in China its cultivation even predates that of rice.

Shiitakes are highly prized, culinary speaking, due to their great versatility, but they are medicinal mushrooms in all respects.

And in this regard I want to briefly tell a very significant anecdote:

Their task was to give a scientific explanation for this phenomenon. The explanation was very simple: in those areas, in 1960, the year to which the events narrated refer, many were cultivated and consumed Shiitake mushrooms.

The diet of the locals included thedaily use of the Shiitake and this made degenerative diseases almost non-existent on the part of those who consumed this mushroom. But how was this and how is it still possible?

Due to the bioactive principles / molecules contained in the Shiitake and the beneficial effects they produce on our body and our health.

And this has been said for centuries by oriental folk medicine and also by traditional science, through a series of studies and irrefutable scientific evidence.

Among other things, for the preparation of this article, I found it very useful to consult the following studies:

What are Shiitake good for?

The Shiitake promote the reduction of cholesterol LDL (the so-called bad cholesterol) and prevent the phenomenon of arteriosclerosis. This makes them promoters of health and good cardiovascular efficiency.

One of the strengths of the Shiitake is to promote the formation of an efficient intestinal bacterial flora, this allows our body to better fight some types of fungal infections.

The Shiitake they offer support to our immune system, both acting alone and in synergy with the Maitake medicinal mushrooms. Taken together, the strengthening action on the immune system is amplified.

The Shiitake they are efficient antioxidants and their action also favors the reduction of internal inflammatory states of the organism.

The Shiitake they represent a completely natural help, aimed at fighting cancer.

So to the question: What Shiitake are good for? There is not a single answer, but a whole series of answers, as we have just seen.

The Shiitake carry out similar or identical actions to those exercised by others mushrooms described in previous articles and all beneficial to our health.

Note: The fact that, i Shiitake mushrooms exercise polyvalent and beneficial actions on our health and our metabolism is due to one of their characteristics, namely that in Shiitake it contains many bioactive principles / molecules capable of carrying out the positive actions described in the lines above.

For those wishing to learn more about these molecules, just read the introduction to the mycology that they find at this link.

What are Shiitake mushrooms?

The question may sound strange, but it isn't. In the sense that, in theory, a mushroom call it Shiitake and that's it, but in reality it is different.

Shiitake is "just" the Japanese name for this mushroom originally from East Asia, but Country you go to, name you find and the Shiitake they have many names. Here is the list:

Shiitake is the Japanese name of the mushroom, but in China it is called Shaingugu. But China is very extensive and, depending on the area, it can also be found under another name.

In fact in China it is also called also Hua Gu or Qua Gu, which is actually a variety of Shiitake named Donko.

But one thing is certain, whatever name you call it it remains one of the best known and most appreciated medicinal mushrooms.

How are Shiitake mushrooms cooked?

To answer this question I have to take the round a bit wide, because it is Shiitakeculinarily speaking, it is very versatile, but you have to know it.

Certainly its flavor is highly appreciated and that is why it is the second mushroom most consumed in the world. Moreover, as just said, it is really very versatile and can be used in several ways. From being stir-fried, to being used in soups or mixed salads, it can be prepared to accompany both meat and fish dishes.

Having said that, it should be noted that the Shiitake they are found both fresh and dried.

As a rule, fresh mushroom is preferable but, in addition to knowing how to cook it, you need to know how to choose it and start by evaluating its compactness.

The Shiitake mushroom ideal, it must have a consistent compactness, but which must also be very uniform and, just as they must be bought fresh, they must also be eaten fresh.

It is also necessary to know how to do the washing properly because they must be rinsed well, but it must be considered that they are endowed with great porosity.

And this makes them absorb water with incredible ease, so finding the right fit is helpful.

If instead we wanted to use Shiitake buckets, it is good to know that it is recommended to use only the cap, since the stem has an excessive fibrousness. And this does not make it suitable for consumption, if not in the preparation, of vegetable broths.

Still on the subject of Dried Shiitake, you have to leave them to soak for an hour and then you can use them for our culinary preparations.

With these simple but important precautions we will all be able to cook to the best of our abilities Shiitake.

Last but not least, the Shiitake they are very prone to dehydration.

This means that, if we intend to cook them, we recommend using a pan with a lid and cooking with abundant steam.

How to clean Shiitake mushroom?

The cleaning of the Shiitake mushroom it is an important thing and, to do it correctly, just keep in mind some simple precautions:

They should be rinsed well but not excessively, because they are very porous and you risk the sponge effect.

The stem, or stem if you prefer, is very fibrous, indeed too fibrous and therefore must be eliminated almost completely. The stems of the Shiitake mushrooms, which in the cleaning phase, as we have just seen, are removed, they are not eaten, but we do not have to throw them away. If desired, they can be used for the preparation of vegetable broths.

Before cleaning, an important consideration must be made regarding Shiitake and it must be done during the purchase phase: these mushrooms absorb in an incredible way the substances present in their habitat or that are used for their cultivation.

Our country must observe very strict rules, therefore, an Italian product has certainly been grown without the aid of particularly aggressive pesticides, permitted in some countries, but prohibited in ours. Even the producers of Italian supplements must comply with stricter and more restrictive regulations than those of other countries. 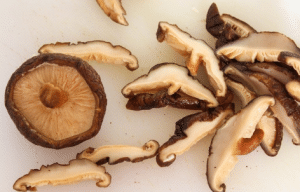 Fig. 1 - As can be seen in the Shiitake in the figure, almost all of the stems have been eliminated.

Where can Shiitake mushrooms be bought?

If you are wondering where Shiitake mushrooms are found, you are spoiled for choice.

From organic food stores, to supermarkets, whose department dedicated to healthy nutrition is well stocked. Being the second most consumed mushroom in the world, it is easy to find it.

The important thing is that they are chosen and cooked following the simple suggestions I gave you in points 4 and 5.

If we wanted "only" to enjoy physiological benefits that Shiitake offer to our health, we can safely take a supplement that contains the extracts.

But the fundamental thing is to turn to a serious and reliable manufacturer.

A company that owns the GMP complete with patent number it means that it has the seriousness and reliability certified and it is from the raw materials, to the processing plants and to the entire production process.

Newer Hydrolyzed whey protein - a help for all athletes
Back to list
Older Reishi: the mushroom of immortality