Acrylamide in food: a hidden danger

The production processes of many foods that we buy at the supermarket or eat outside the home can hide a danger to everyone's health. Let's see what it is and how this risk can be avoided or prevented.

What is acrylamide and how is it formed

Acrylamide is a substance with a very simple chemical structure, consisting of 10 atoms including Oxygen (O), Carbon (C), Hydrogen (H) and Nitrogen (N), which are also found in sugars and proteins. It is widely used in various industrial processes to derive thickeners used in the production of paper, permanent press fabrics, dyes, plastics, and in the treatment of white water and waste water (including sewage), in the formulation of pesticides and in tertiary recovery. of oil. Acrylamide derivatives are also found in construction products such as paints and tar, adhesives and packaging.

In the biological field and in scientific research, a water-soluble gel based on polyacrylamide, an acrylamide polymer, is used for the study of proteins. Acrylamide powder is a powerful neurotoxin that can be easily absorbed by the skin. Once gelled in its polymer, it loses its dangerousness as it is no longer absorbable; In any case, researchers must wear protective gloves, goggles and / or suitable masks to avoid inhaling the powder before solubilization.

However, cigarette smoking and some foods are the main sources of acrylamide exposure for the population. Acrylamide is found mostly in the following foods: French fries and packaged fried products (chips, corn tortillas ...), crackers, bread products, rusks and biscuits, cereals, black olives in tin cans, plum juice, coffee and products toasted. The levels of acrylamide in foods are variable and depend on the production method, time and temperature of the cooking processes. Smokers also have 3 to 5 times higher acrylamide levels than non-smokers.

The presence of acrylamide in food was first reported by scientists from the Swedish National Food Authority and the University of Stockholm in April 2002. Researchers initially investigated the exposure of workers in tunnels following the accidental release of agents. for grouting and cementation; however they could not understand why workers not previously exposed to acrylamide (controls) had levels of this compound in their blood. This data prompted scholars to investigate sources of exposure in everyday activities and found that acrylamide formed readily in some carbohydrate-rich foods while its content is reduced in higher protein products such as meat and fish. .

This compound is not found naturally in foods but can form quickly when sugars and amino acids (the "building blocks" of proteins) react with each other in foods rich in carbohydrates and starches during the cooking process, if this occurs at higher temperatures at 120 ° C. Among the amino acids involved, the one that plays a fundamental role is asparagine, present in many starchy vegetables, especially potatoes. The reaction that leads to the formation of acrylamide is known as the “Maillard reaction”, which is also responsible for the crispy crust on grilled meat, bread, pizza, chips, vegetables in batter, etc. The more browned a food appears, the more acrylamide will have formed.

If one of the two components, or sugars or amino acids, is missing, the acrylamide is not formed. High amounts of acrylamide have also been found in potato and beet-based preparations, especially if they are heated: in fact, in these two vegetables, the levels of acrylamide are influenced by the high content of asparagine.

What are the risks to our health?

Exposure to acrylamide depends on the combination of foods consumed in the diet and their method of preparation, smoking habits and passive smoking, professional sources. Skin absorption of acrylamide is low as the skin forms our first barrier against external hazards. Conversely, oral exposure is the main source of acrylamide intake.

In fact, both in humans and in animals, after ingestion, acrylamide is rapidly absorbed in the gastrointestinal tract and, through the body fluids, reaches all organs. The parts of the body where it accumulates the most are the kidney, liver, nervous system, blood and testicles. It can even cross the placenta and is present in trace amounts in breast milk.

One of the main metabolites that are formed in the body is glycidamide, a molecule that is able to bind to DNA or proteins such as hemoglobin in red blood cells. Acrylamide and glycidamide act through the formation of free radicals, responsible for oxidative stress in our cells. Several studies have found that both of these compounds are dangerous toxins for the nervous system. Neurotoxicity in humans is associated primarily with occupational risk rather than dietary and clinically manifested through peripheral neuropathy, numbness, muscle weakness, and difficulty moving.

Exposure of laboratory animals to high doses of acrylamide and glycidamide, administered orally in drinking water, has genotoxic and carcinogenic effects, i.e. it causes DNA damage, causing the onset of tumors in various organs (brain, udder, uterus, testicles, kidneys, skin, stomach, endocrine glands ...); other harmful effects are borne by pre- and post-natal development, as well as negatively affecting the functionality of the male reproductive system.

There are still few human studies to draw definitive conclusions and the results obtained provide only limited evidence regarding the risk of developing cancer following dietary acrylamide intake. Following the discovery of acrylamide in cooked foods, the first food monitoring campaign began in 2007, with the European Commission's Recommendation 2007/331 / EC and the publication of Guidelines to reduce the acrylamide content in processed foods.

Then followed the European Union Recommendations 2010/307 / EU and 2013/647 / EU. In June 2015, EFSA, the European Food Safety Authority, published a report in which it assesses the risks related to the presence of acrylamide and glycidamide in starchy and carbohydrate-rich foods, indicating the need to control their consumption. Experts from EFSA's Scientific Panel have reconfirmed the assessments made in previous years by the World Health Organization (WHO) Expert Committee on Food Additives and the United Nations Food and Agriculture Organization (FAO) according to which the acrylamide taken with the diet increases the risk of genetic mutations and, consequently, of the onset of tumors in all age groups. EFSA also reiterates the need to carry out more studies and research on humans to identify their toxicology, exposure and training.

Finally, in November 2017, the European Commission announced Regulation 2017/2158 / EU establishing mitigation measures and reference levels for the reduction of acrylamide in food, applied starting from 11 April 2018 (Table 1) and mandatory for the food industries. Since acrylamide is a potentially carcinogenic substance, it is not possible to establish its toxic dose as, theoretically, even a single molecule would be enough to trigger a series of events that lead to the development of a tumor in more predisposed individuals. The only toxicological principle currently applicable is based on the reduction of acrylamide to the lowest possible levels.

How to avoid or limit the consumption of acrylamide

Since it is present in many foods and is formed at high temperatures, in addition to being used in some industrial processes, it is not possible to completely eliminate acrylamide but some simple measures can be adopted to reduce it to acceptable levels.

Vitamins, antioxidants and natural compounds represent a valid help to reduce the percentage of acrylamide

Free radicals, which are formed following the intake of environmental and food toxins such as acrylamide, are responsible for the oxidative stress which is at the basis of the onset of chronic, metabolic and neoplastic diseases. Antioxidants are substances capable of inhibiting the formation of free radicals in food and contribute to their elimination within our body, detoxifying us.

As already mentioned in point 5, the decrease in pH during the leavening of baked products allows to limit the formation of acrylamide during cooking. To do this, in addition to yeast it is possible to use bicarbonate as a leavening agent; or, the addition of organic acids such as citric acid obtained by squeezing the lemon and the acetic acid contained in the vinegar allow to reduce the levels of acrylamide even in 60%. Obviously, since these compounds have a bitter taste, it is necessary to dose them carefully in order not to compromise the sensory acceptability of the final product.

Scientific studies have also evaluated the effectiveness of adding green tea extracts to the breading of fried products at 175 ° C such as chicken wings and legs, cutlets and chips. Furthermore, green tea extract does not alter the taste of the dish. Interfering with the formation of acrylamide are some flavonoids with antioxidant action contained in tea leaves and in particular epicatechin and epigallocatechin.

In addition to green tea, other aqueous extracts obtained from aromatic plants such as wild oregano, thyme, rosemary or flowering plants such as bougainvillea or spices such as cinnamon help reduce acrylamide levels during cooking up to 62%. The procedure for preparing the aqueous extracts of these plants is simple and there are numerous recipes available on the web; in fact, it is a question of making infusions, as for herbal teas. Once the extract is obtained, in order for the anti-acrylamide effect to take place, it is necessary to immerse the food to be cooked or fried for a few minutes.

Another useful precaution in the preparation of fried foods, especially potato chips and tortillas, consists in the use of oil containing chilli which inhibits the formation of acrylamide up to 77% and at the same time gives a pleasantly spicy taste to our dishes. Vitamins, such as vitamins A, B6, C, D, E, H (or Biotin), and some minerals such as zinc and selenium also reduce the formation of the dangerous compound by 50%. Finally, the turmeric, as well as the ginseng, ginger and cardamom possess very powerful antioxidant virtues capable of counteracting the formation of free radicals, particularly protecting the digestive tract, which is more subject to oxidative stress through the ingestion of food toxins such as acrylamide. These spices have a very pleasant taste so it is sufficient to add them every day to the dishes we prepare to protect us from many invisible enemies. 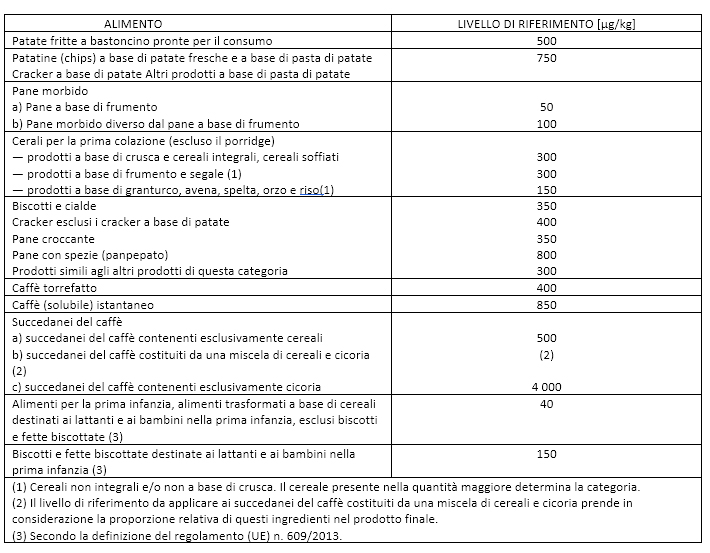 ACRYLAMIDE: here's how to avoid it!

Acrylamide in the food chain, what information do we have available