Carnitine: what it is, what it is used for and what are its benefits

In nature, carnitine is available in the form of two optically active isomers (chiral, ie which make the plane of polarized light rotate), called respectively D-carnitine and L-carnitine. At room temperature, pure carnitine appears as a white powder, of the zwitterion type (neutral, but with localized positive and negative charges), soluble in water and with low toxicity. In animals, carnitine is present only in the form of the L-enantiomer (L-carnitine), while D-carnitine is considered toxic because it inhibits the activity of L-carnitine.

Carnitine is found in almost all organisms and animal tissues; its name is in fact a generic term, used to indicate all similar compounds, such as: L-carnitine, acetyl-L-carnitine and propionyl-L-carnitine. Its concentration is higher in cardiac and skeletal muscle, as it represents 0.1 % of dry matter (deprived of water).

Not surprisingly, carnitine was discovered and isolated for the first time from meat extracts, in 1905, products from which the name was coined (from “carnus”, in Latin). The human body probably synthesizes a sufficient amount of it using the side chains of lysine (essential amino acid). This endogenous production is necessary to meet the metabolic needs of energy production in the body, as carnitine acts as a long-chain fatty acid transporter in mitochondria, which will then be oxidized to obtain kilocalories (kcal). Some individuals with genetic or medical disorders, such as preterm infants or those suffering from an enzymatic-metabolic alteration, may be unable to produce enough of it, making it a nutrient conditionally essential.

In healthy subjects, carnitine deficiency is the direct consequence of generalized malnutrition, especially protein (in which the adequate supply of lysine is lacking). Many argue that, in athletes, an above-average intake of carnitine has a positive effect on performance; due to its decisive function in the oxidation of long-chain fatty acids, a correct concentration in the muscle optimizes the slimming process.

In practice, carnitine acts as a specific carrier for long-chain fatty acids, such as palmitic acid, of which the triglycerides of white human adipose tissue are very rich. It is therefore an essential factor in being able to "burn" most of the circulating fats, a decisive process for example in endurance sports such as running and cycling, but also during nutritional slimming therapy or in cutting bodybuilding. 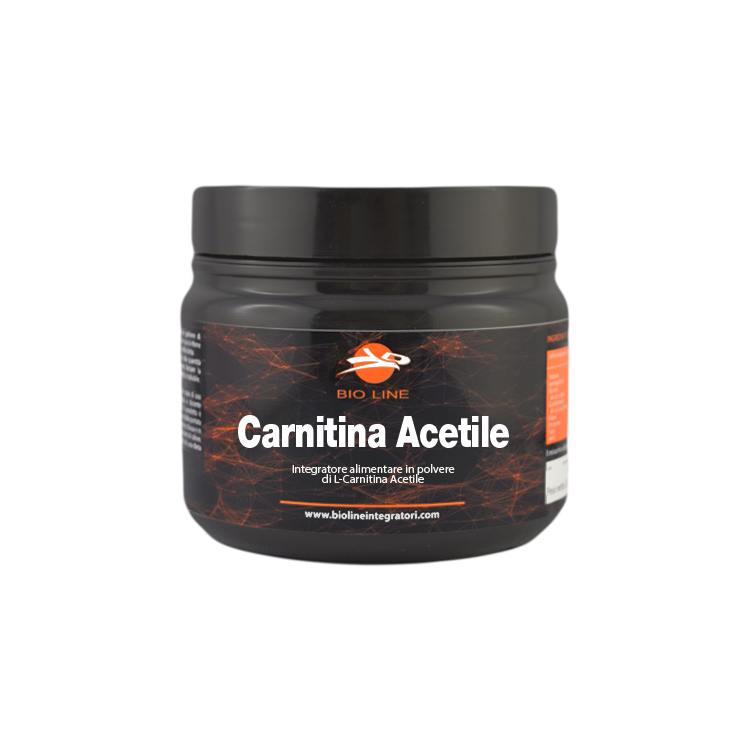 Carnitine (Powder or Tablets) - Acetyl L-Carnitine Supplement
L-carnitine: is the amino acid responsible for transporting fatty acids inside the cell for their oxidation and transformation into energy for the body.
BUY NOW

In healthy people, there is no real nutritional requirement for carnitine; this is because, as we have already said, this molecule can be synthesized in an adequate way starting from the amino acid lysine.

However, it must be emphasized that, in some cases, the metabolic demand for carnitine can increase considerably - this is the case, for example, of athletes who perform extremely prolonged activity. If then the nutritional intake is compromised, as in excessively restrictive diets, or in those that exclude meat, or in diets with very low total protein intake, there remains the doubt that endogenous production may be insufficient. In these cases, if the diet is not corrected adequately, it can be decisive to take specific food supplements of L-carnitine.

Excluding these situations, only people suffering from certain genetic or functional diseases have a high need for carnitine, who - if not properly treated - are recognized as having a high probability of nutritional deficiency (see below).

There are two types of carnitine deficiency, primary deficiency and secondary deficiency. Under these circumstances, a specific carnitine level has been scientifically established.

Primary carnitine deficiency is a genetic disorder of the carnitine cellular transport system, typically occurring at the age of five, with symptoms of cardiomyopathy, skeletal muscle weakness, and hypoglycemia.

Secondary carnitine deficiencies, on the other hand, can occur as a result of certain disorders such as chronic renal failure or in conditions that reduce the absorption of carnitine or increase its excretion, for example drug therapies based on antibiotics, malnutrition and anatomical-functional alteration of the intestine.

The average intake of carnitine with the diet, referred to an adult who respects any diet containing animal products, is about 60-180 mg of carnitine / day (corresponding to 2-12 μmol of carnitine / day / kg of weight corporeal, which will constitute the 75 % of global carnitine). Vegans introduce much less of it, about 10-12 mg / day (0.1 μmol / day / kg of body weight), since in their diet there is a lack of foods mainly rich in carnitine; in this case, the 90 % of total carnitine is of endogenous origin. However, it is hypothesized that the difference in plasma carnitine levels between omnivorous humans and strict vegetarians is probably not of any clinical significance.

In 1989, the Food and Nutrition Board (FNB) concluded that carnitine was not an essential nutrient as healthy human liver and kidneys synthesize sufficient amounts of carnitine from amino acids to meet daily body needs without the need to consume it from supplements or food. . Additionally, the FNB has not established the Dietary Reference Intake (DRI) for carnitine.

Absorption and excretion of carnitine

Approximately 54 - 86% of dietary carnitine enters the bloodstream after absorption in the small intestine.

Excretion of carnitine occurs in the kidney. The level is extremely influenced by factors such as diet, motor activity and any pathologies, both of the kidneys and other kinds. In case of nutritional deficiency, or in any case of metabolic deficit, the kidneys tend to retain as much carnitine as possible.

Effectiveness of carnitine supplementation for athletes

Several studies have been conducted on carnitine supplement in athletes, given its role in the metabolism of fatty acids; however, individual responses varied significantly in the subjects involved.

Carnitine has been studied in many cardio-metabolic conditions; modest evidence was observed on its efficacy as an adjuvant in the treatment of heart disease and diabetes. However, there is not enough evidence to determine its effectiveness. It has no effect on the prevention of mortality associated with cardiovascular conditions.

Carnitine has no noticeable effect on serum lipid levels, with the exception of a possible lowering of LDL lipoproteins (the so-called bad cholesterol).

Carnitine has no effect on most parameters in end-stage renal disease, however it may have a positive effect on c-reactive protein levels. The effects on mortality and disease outcome are, however, unknown.

Administration of L-carnitine can help treat valproic acid toxicity in children and adults.

Carnitine (Powder or Tablets) - Acetyl L-Carnitine Supplement
L-carnitine: is the amino acid responsible for transporting fatty acids inside the cell for their oxidation and transformation into energy for the body.
BUY NOW

How much to take?

In case of need, we recommend 500-2000 mg / day of L-carnitine, divided into various intakes. In the treatment of some conditions, such as cardiac ischemia, the dose can be as high as 15,000 mg / day, but these are only medically treated conditions.

When to take it?

There is no specific time to take carnitine. The various intakes should be evenly distributed throughout the day; if placed near meals, it is preferable to avoid that they are too abundant.

Which carnitine to take?

Carnitine is also a Food and Drug Administration (FDA) approved drug for the treatment of diagnosed primary and secondary deficiency syndromes.

Precautions to supplement with carnitine

There are no major precautions supplementation with L-carnitine. As mentioned at the end of the previous paragraph, no noteworthy effects were highlighted on the parameters of end-stage renal disease, which would allow us to deduce a non-difficult disposal from the blood.

During pregnancy and breastfeeding it is always a good idea to consult your doctor.

Side effects of carnitine

Mega doses of carnitine can cause side effects such as nausea, vomiting, abdominal cramps and diarrhea. In patients at risk, some psychiatric symptoms have been observed.

Pharmacological interactions with pivato-conjugated antibiotics such as pivampicillin, and with anticonvulsants valproic acid, phenobarbital, phenytoin or carbamazepine, which can contribute to decrease serum carnitine levels, should be noted.

However, it is a good idea to consult your doctor before use and follow the recommendations mentioned on the packaging of the related products.

PrevPREVIOUS ONEDrinking beer is good for you. Science says it!
FOLLOWINGVitamin C (L-Ascorbic Acid): where it is found in nature and what it is used forNext
LEAVE A COMMENT