Vitamin C (L-Ascorbic Acid): where it is found in nature and what it is used for

What is Vitamin C or Ascorbic Acid?

There vitamin C or L-ascorbic acid - also called antiscorbutic factor - is a rather delicate water-soluble vitamin and susceptible to environmental conditions; it is particularly perishable when exposed to intense heat and oxidation (exposure to oxygen).

Also very useful in the food industry and for the numerous health virtues attributed to it, the production and trade of C vitamin as an additive and cosmetic ingredient - in various chemical forms, such as calcium or sodium ascorbate - and as a food supplement, it is among the most important in the world.

There C vitamin it is abundantly present in certain foods of plant origin, while foods of animal nature generally not they contain it in significant quantities.

The only exceptions are:

Chicken eggs do not naturally contain C vitamin, not even raw.

Foods of plant origin are globally considered a good source of L-ascorbic acid, even if the specific quantity depends on the product in question, the nature of the soil and the climate of cultivation, the state of ripeness at the time of harvest, the time and conditions of conservation, and any preparatory work for consumption.

The most common and widespread products in the Italian diet that contain high concentrations of C vitamin I'm:

There C vitamin it is also quite abundant in the germ of seeds, such as that of rice, corn, wheat, etc .; on the other hand, due to conservation and industrial processing, often a large part of theL-ascorbic acid remains compromised. It is different if we take the sprouts into analysis. Being “living” organisms, these maintain the levels of C vitamin and can be considered excellent alternative nutritional sources.

Then there is a long list of foreign products very rich in L-ascorbic acid, however scarcely in use within the Bel Paese. Between these:

Note: researching the specific nutritional content in C vitamin of foods pay attention to the state or form of the same. Whether dried or preserved, and rich in L-ascorbic acid, in all probability these are foods artificially enriched in antioxidants.

Warning! Cooking up to or above 60 ° C causes the loss of at least 60 % of the C vitamin overall, an amount that increases over time. High deductions of L-ascorbic acid they are observed by leaching, or by dispersion-dilution in water. This happens, for example, by soaking fruit and vegetables cut into pieces, or boiling them by poaching. Cutting and storing at low temperatures, on the other hand, do not seem to cause large losses of C vitamin, as long as the food surfaces are not left exposed to the air - it is necessary to adequately cover with cling film or lids.

Several food safety agencies have evaluated the effect of food fortification with ascorbates and determined whether it is relevant.

In Canada, for example, fortification has been made "mandatory" for several food classes, such as fruit-flavored drinks, blends and concentrates, low-energy diet foods, meal replacement products and evaporated milk.

The content of tablets and capsules ranges from 25mg to 1500mg per serving.

The most commonly used chemical forms of supplement are theascorbic acid, sodium ascorbate and calcium ascorbate. The molecules of C vitamin they can also be linked to the palmitate of fatty acids, creating ascorbyl palmitate (see below), or incorporated into liposomes. 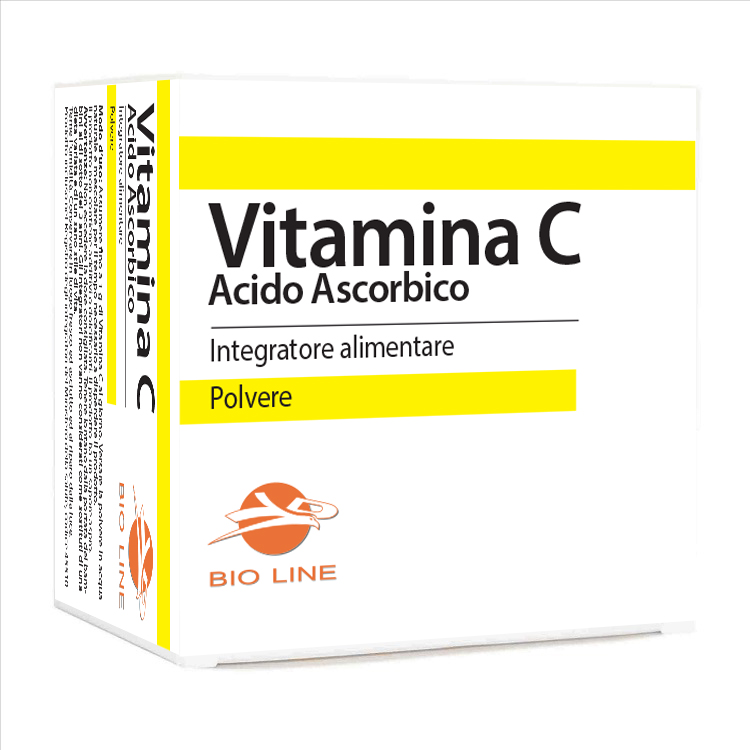 Vitamin C Powder Supplement (sachets)
Ascorbic Acid - Vitamin C is a food supplement of Vitamin C in powder, indicated in all cases where it is necessary to increase the quantity of this vitamin for its antioxidant properties.
FIND OUT MORE 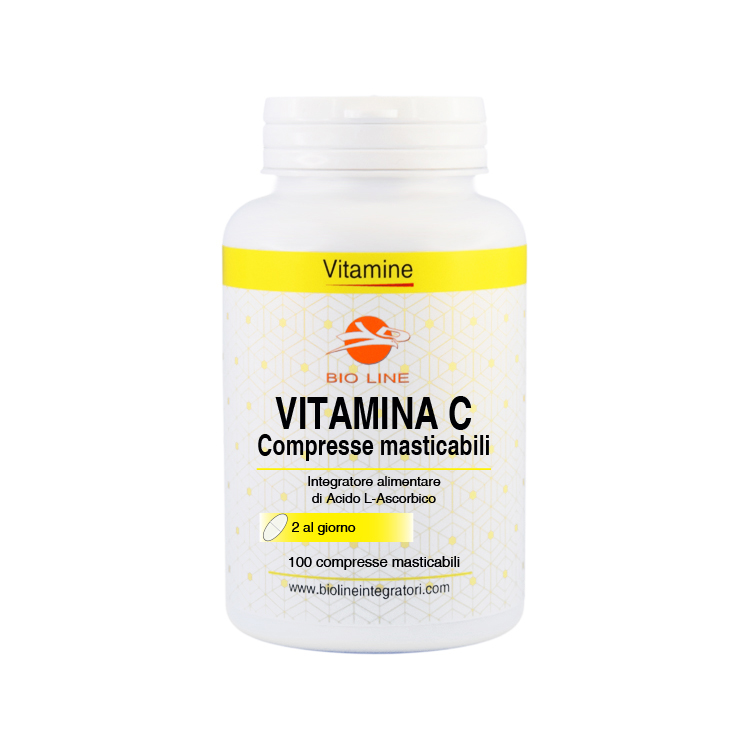 Vitamin C Supplement in Chewable Tablets
It contributes to the function of the immune system during and after intense physical exertion, to the formation of collagen for the function of blood vessels and to the protection of cells from oxidative stress.
FIND OUT MORE 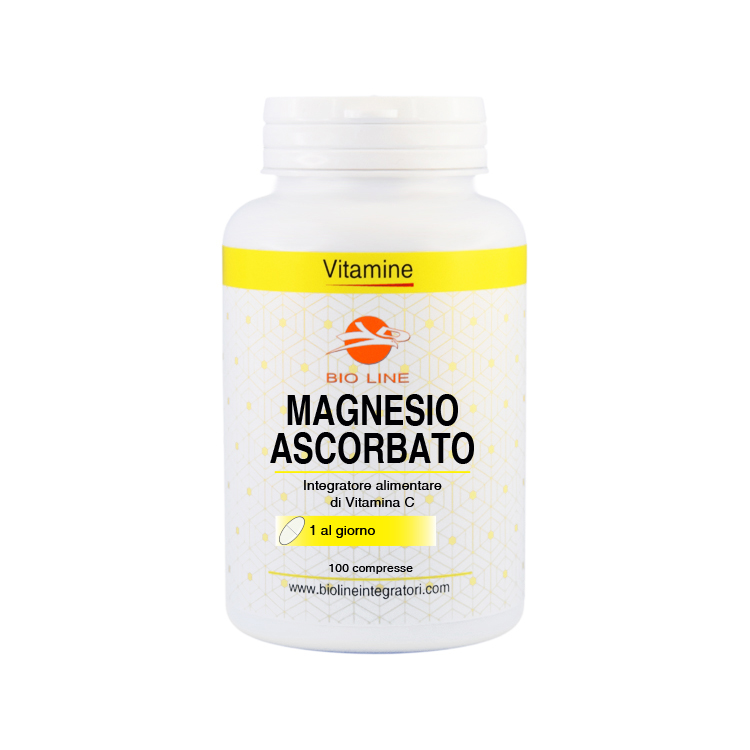 L'ascorbic acid and some of its salts and esters are additives commonly added to various types of foods, mainly with the intent of retarding oxidation.

How much vitamin C (L-ascorbic acid) to take with the diet?

The recommended intake levels of C vitamin for the adult population (> 18 years) they are slightly different depending on the bibliographic source consulted:

Each research institute then estimated the recommended intake levels for different population groups, such as growing-up, pregnant, nursing and smokers. The following is recommended by the LARN:

* As cigarette smokers and people exposed to related secondhand smoke show plasma levels of L-ascorbic acid lower than non-smokers, an increase of 35 mg / day was established. The hypothetical mechanism underlying this circumstance would be the oxidative damage caused by the inhalation of smoke. To the advantage of this theory, the outcome of a meta-analysis which showed an inverse relationship between the assumption of C vitamin and lung cancer, although he concluded that more research is needed to confirm this observation.

The maximum tolerable dose - Tolerable Upper Intake Level - of L-ascorbic acid for an adult is about 2,000 mg / day, as certain human studies have reported the occurrence of diarrhea and other gastrointestinal disorders at doses above 3,000 mg. / day.

A 2013-2014 survey conducted by National Center for Health Statistics reported that for adults 20 years of age and older, men consumed an average of 83.3 mg / day and women 75.1 mg / day of C vitamin. This means that half of women and more than half of men do not introduce the minimum amount of ascorbic acid necessary for psychophysical well-being. The same survey stated that around 30 % of adults report having consumed a dietary supplement of C vitamin or a multi-vitamin / mineral supplement that included C vitamin and that, for these subjects, the total consumption was between 300 and 400 mg / day.

What is Vitamin C used for?

There C vitamin it is an essential nutrient; since the human organism is unable to synthesize it, we are obliged to introduce it with food. Other animals, such as large herbivores, on the other hand, have the ability to produce it autonomously. Goats, for example, synthesize L-ascorbic acid in large quantities; an adult animal in full health is capable of producing over 10,000 mg of L-ascorbic acid per day - increasing them in case of stress.

The functions of the C vitamin in the human organism are different. It is a cofactor of many enzymatic reactions that mediate a variety of essential biological functions, including collagen synthesis and wound healing.

Another primary biochemical role of the C vitamin is that of a powerful antioxidant (reducing agent) by donating electrons in various enzymatic and non-enzymatic reactions. In this way theL-ascorbic acid it converts to an oxidized state, such as semidehydroascorbic acid or dehydroascorbic acid. These compounds can be restored to a reduced state by glutathione and NADPH-dependent enzymatic mechanisms.

There C vitamin it is recommended in periods of greatest immune vulnerability, given its trophic role in relation to the immune system.

The human body can only store a certain amount di vitamin C inside the liver; in case of chronic shortage, these stocks run out quite quickly.

The shortage of C vitamin leads to impaired collagen synthesis, which is too unstable, contributing to the more severe symptoms of scurvy. Furthermore, the lack of L-ascorbic acid it causes the malfunction of many other enzymes that depend on it.