Ginseng: a tonic against stress

Ginseng is one of the best known and most used herbal products in the world, used in Chinese medicine for more than 2000 years to cure all types of ailments. In this article a summary of the main sources of ginseng and beneficial properties of this substance.

Herbal remedies based on ginseng they are popularly known for their tonic functions on the body. Ginseng is a substance adaptogen, that is, it increases resistance to physical, chemical and biological stress, increasing the physical and mental abilities to cope with work.

The main vegetable source of ginseng is the plant Panax ginseng, also called Asian or Korean ginseng. Ginseng is grown in China, Russia, Korea, Japan, USA and Canada, and is one of the best known medical herbs, widely used in East Asia as a tonic, adaptogen, tonic and anti-aging.

Meaning of the name:

- Panax: from the Greek παν = all and ἀκέια = remedy, that is, a remedy for all diseases

- Ginseng: from Chinese jin = man and chen = ternary, which means the tern with man and the sky.

Ginseng is a heterogeneous mixture of substances, obtained by extraction from the parts of the plant containing the highest concentrations of active ingredients, in particular from the root, stems of leaves and berries.

The root of Panax ginseng recalls the curious shape of a small man (Fig. 1). 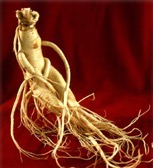 These substances, in particular ginsenosides, have been shown to have numerous beneficial effects on the body, such as anti-inflammatory, antioxidant and anti-cancer. The results obtained from clinical trials have shown that the ginsenosides of Panax ginseng improve cognitive functions, immune functions and conditions associated with diabetic pathology.

There are about fifteen ginsenosides in all, among them the ginsenoside Rg seems to be the most active.

Experimental studies have shown that ginseng acts in animal models by increasing their physical resistance to extreme stress conditions: ginseng prolongs the survival of animals subjected to intense cold, radiation and prolonged fasting.

These effects could be the consequence of a stimulation of ginseng at the level of the hypothalamus-pituitary axis with the release of ACTH which in turn stimulates the adrenal glands to produce corticosteroids.

Ginseng also acts on memory, improving it, normalizes blood pressure, lowers blood levels of glucose and cholesterol and inhibits platelet aggregation. In the intestine it promotes the growth of good bacteria such as bifidobacteria, slowing the proliferation of clostridia and other harmful or pathogenic species.

–     Effects on the central nervous system: it has been experimentally shown that the ginsenoids present in the ginseng root improve learning and memory in animal models, increasing the brain monoaminergic level. The effects of ginsenosides extracted from the stem of the leaves have been evaluated in different varieties of ginseng. For example the extract from Siberian ginseng (Eleutherococcus senticosus) has an anti-fatigue, anti-stress and anti-depressant effect. On the other hand, an in vivo study revealed that the ginsenosides del Chinese ginseng, extracted from the stems of the leaves, and called Jiannaoning, improves the memory of animals with cerebral ischemia, and regulates the levels of interleukin-2 and interleukin-6 and neuropeptide Y, pro-inflammatory substances, in the brain.

–     Effects on the cardiovascular system: ginseng has a preservative effect on cardiovascular function, and prevents myocardial infarction in experimental animal models.

–     Hypoglycemic effect: one third of diabetic patients use dietary supplements or alternative medicines based on plant extracts. Several studies show that dry extracts of Chinese and American ginseng root have a positive effect in reducing plasma blood sugar. Furthermore, extracts of ginseng leaf stems have been shown to increase the basal content of insulin in pancreatic cells and to facilitate its release in relation to the increase in post-prandial plasma glucose.

–     Anti-obesity effect: obesity is a serious medical problem that causes, as a consequence, even serious diseases, such as cardiovascular accidents, hypertension and diabetes. The constituents of berries, roots and stems of American and Chinese ginseng leaves perform an anti-obesity function in animal models, significantly reducing body weight.

–     Antitumor effect: the anticancer effect of ginseng is an important pharmacological effect. Following co-administration of ginseng with chemotherapy drugs, it improves the therapeutic effect of the drugs themselves, reducing complications to the haematopoietic system caused by chemotherapy and radiotherapy.

The constituents of ginseng could become a new and potent immunotropic agent, improving cellular immunity and the effect of chemotherapy drugs in the treatment of patients with carcinomas in the urological system.

–     Antioxidant effect: ginseng has been shown to have antioxidant properties, neutralizing oxygen free radicals, extremely radioactive chemicals that are harmful to DNA and cell membranes.

–     Anti fatigue effect: extracts from the stem of Chinese ginseng leaves have an anti-fatigue action: in rats, oral administration significantly prolongs swimming time, reducing the formation of lactic acid in the muscle, which is mainly responsible for the sensation of fatigue following exertion prolonged physique.

–     Anti ulcer effect: the constituents extracted from the roots of Panax ginseng they are used in China for the treatment of gastrointestinal disorders. It has been scientifically demonstrated that the polysaccharide fraction of the stems of ginseng leaves has a strong protective action against lesions to the mucous membranes responsible for gastritis and ulcers. The polysaccharides contained in the stems in fact create a protective film that covers the gastric lesions, protecting them from the damaging action of the gastric juice, and facilitating the reparative processes.

–     Erectile dysfunction: ginseng is traditionally used to stimulate sexual function in men of all ages. According to a study conducted by Mahady and colleagues in 2000, approximately 6 million men in the US use this plant to improve their sexual function. Ginseng increases the synthesis of NO (nitrogen monoxide) in the endothelium of blood vessels, and performs an antioxidant and protective function at the vascular level. The increase in NO synthesis in the endothelium of the vessels that supply the corpora cavernosa of the penis improves erectile function, carrying out a therapeutic action against erectile dysfunction (de Andrade and colleagues, 2007).

Side effects and main contraindications

Ginseng is generally well tolerated and the side effects associated with its use are rare and reversible. The most common are: nausea, diarrhea, euphoria, insomnia, headache, hyper and hypotension.

Ginseng can interact with caffeine and cause high blood pressure. It can interfere with warfarin, a drug used in anticoagulant therapy, reducing its effectiveness.

The intake of ginseng is contraindicated in hypertensive subjects (high blood pressure), asthmatics and in the presence of vaginal bleeding or heavy menstruation.

Finally, ginseng lowers plasma glucose, so it can enhance the effect of oral hypoglycemic drugs and insulin. Finally, ginseng is contraindicated in children and pregnant or breastfeeding women.