There Crohn's disease and the Ulcerative colitis they have a prevalence between 1 and 1.5 cases per 1000 people.

These inflammatory diseases, affecting the gastrointestinal system, unfortunately last for a lifetime, but with drug treatment or surgery it is possible to control the symptoms.

Both diseases are more common in women and often appear in adolescence and around the age of 20.

The clinical course is not predictable, in fact periods of disease manifestations alternate with periods of symptom remission.

The distinction between ulcerative colitis and Crohn's disease is largely based on the distribution of the sites involved (Fig. 1). Ulcerative colitis predominantly affects the terminal part of the intestine (colon and rectum) and inflammation extends to the mucosa and submucosa of the intestinal wall. Crohn's disease, on the other hand, also called regional enteritis, can involve any area of the gastrointestinal tract, from the mouth to the anus, and the inflammation is typically transmural, that is, in addition to the mucosa and submucosa, it affects deeper areas of the organ wall. 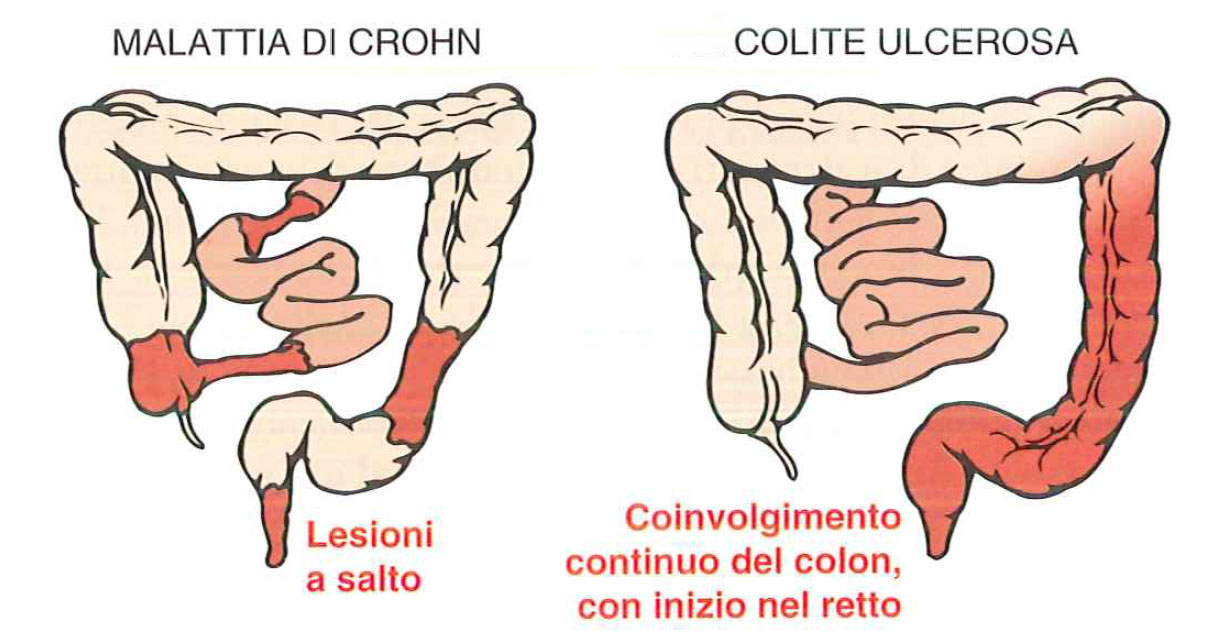 Both Crohn's disease and ulcerative colitis patients have extremely variable clinical manifestations. In most patients, the condition initially manifests itself with relatively mild intermittent bouts of diarrhea, fever, and abdominal pain. In some patients, the onset of the inflammatory disease is more distinct and manifests itself with fever, bloody diarrhea, and severe abdominal pain that may simulate appendicitis or intestinal perforation.

Typically periods of active disease are interrupted by asymptomatic phases lasting weeks or months. Reactivation of the disease can be caused by external triggers such as physical or emotional stress, specific foods and smoking.

Extraintestinal manifestations of the disease include uveitis (inflammation of the eye), arthritis, ankylosing spondylitis (systemic inflammatory rheumatic disease) and erythema, and any of these can develop before bowel disease is recognized. Primary sclerosing cholangitis (inflammation of the hepatic bile ducts) can occur in association with Crohn's disease, but is more common in ulcerative colitis. The risk of colon cancer increases in patients with long-standing colon disease.

In patients with Crohn's disease or ulcerative colitis, fistulas, or pathological communications, tubular in shape, can develop between two body cavities, which can also involve the urinary bladder, the vagina and the abdominal or perianal skin. Peritoneal perforations and abscesses are common events, such as intestinal obstructions, which can be resolved with surgery.

Genetic and environmental factors contribute to the development of the disease

The etiology of inflammatory bowel disease is still unknown, however many researchers argue that a combination of genetic and environmental factors can cause the disease. In fact, the risk of developing inflammatory bowel disease increases when there is a family member who suffers it and, in Crohn's disease, the concordance rate for monozygotic twins is 50%. The concordance for monozygotic twins for ulcerative colitis is 16%, suggesting that genetic factors are less dominant than in Crohn's disease.

Furthermore, cigarette smoking has been shown to play a crucial role in the pathogenesis of Crohn's disease. The latter is a strong risk factor and, in some cases, the onset of Crohn's disease is associated with the onset of smoking. Unfortunately, however, it does not coincide with a remission of the disease. On the contrary, it has been reported that in some patients the first symptoms of ulcerative colitis appear shortly after they stop smoking, and smoking can partially relieve the symptoms of the disease. However, studies of nicotine as a therapeutic agent for ulcerative colitis have been discouraged.

The abundance of microbial populations in the gastrointestinal lumen is remarkable, reaching up to 1012 organisms per milliliter in the colon and at 50% in the fecal mass. Just think that the number of bacteria present in the gastrointestinal tract exceeds the number of cells that make up our body, it means that in our organism, at the cellular level the human component is equal only to 10%. Although the composition of this dense microbial population tends to be stable, it is modifiable by the diet and there is considerable variety among individuals.

It is believed that some harmful microorganisms can take advantage of the weakness of the inflamed mucosa and the inability to select intestinal bacteria by the immune system, proliferating and damaging the symbiotic bacterial species of our intestine, essential for the digestion and assimilation of food .

Despite growing evidence of the role of the gut microbial environment in the pathogenesis of inflammatory bowel disease, its precise role is yet to be defined. For example, some antibodies active against a bacterial flagellin protein are associated with the formation of strictures, perforation and involvement of the small intestine in patients with Crohn's disease. In support of this hypothesis, the intake of antibiotics has allowed to improve the management of intestinal symptoms of inflammatory disease.

The basic drug for Crohn's disease and ulcerative colitis is the anti-inflammatory mesalazine or 5-aminosalicylic acid (Asacol®, Pentacol®) (Fig. 2). Mesalazine belongs to NSAIDs (Non-Steroidal Anti-Inflammatory Drugs), is a salicylate with limited action to the gastrointestinal tract. Available in tablets, but also in enemas or rectal foams against ulcerative colitis.