Vitamin E represents a set of fatty substances with a strong antioxidant effect; most of its properties derive from this aspect. A summary of the main generalities of vitamin E, food sources and beneficial properties for the body.

For Vitamin E we mean a group of closely related lipid substances, isolated following the discovery of vitamin D in 1922 from wheat germ oil. Such substances are called tocoli.

Tocoles were originally designated as antysteryl factors, since laboratory animals fed a diet lacking in vitamin E developed sterility and atrophy of the genital organs; however, reproductive function was restored by introducing fresh lettuce, meat or yeast rich in vitamin E.

Later the high antioxidant power of tocols was discovered, demonstrating the high capacity of these nutrients to destroy the most reactive forms of oxygen radicals and other free radicals, protecting fatty acids from oxidation and preventing oxidative damage to lipids of cell membranes, a phenomenon that can cause cellular fragility.

How are tocols classified?

Tocopherols and tocotrienols are in turn each made up of 4 different forms, distinguished with the letters of the Greek alphabet:

What distinguishes each of the 8 forms of vitamin E is the number and position of the methyl groups fixed on the hydroxychromane core (Fig. 1). 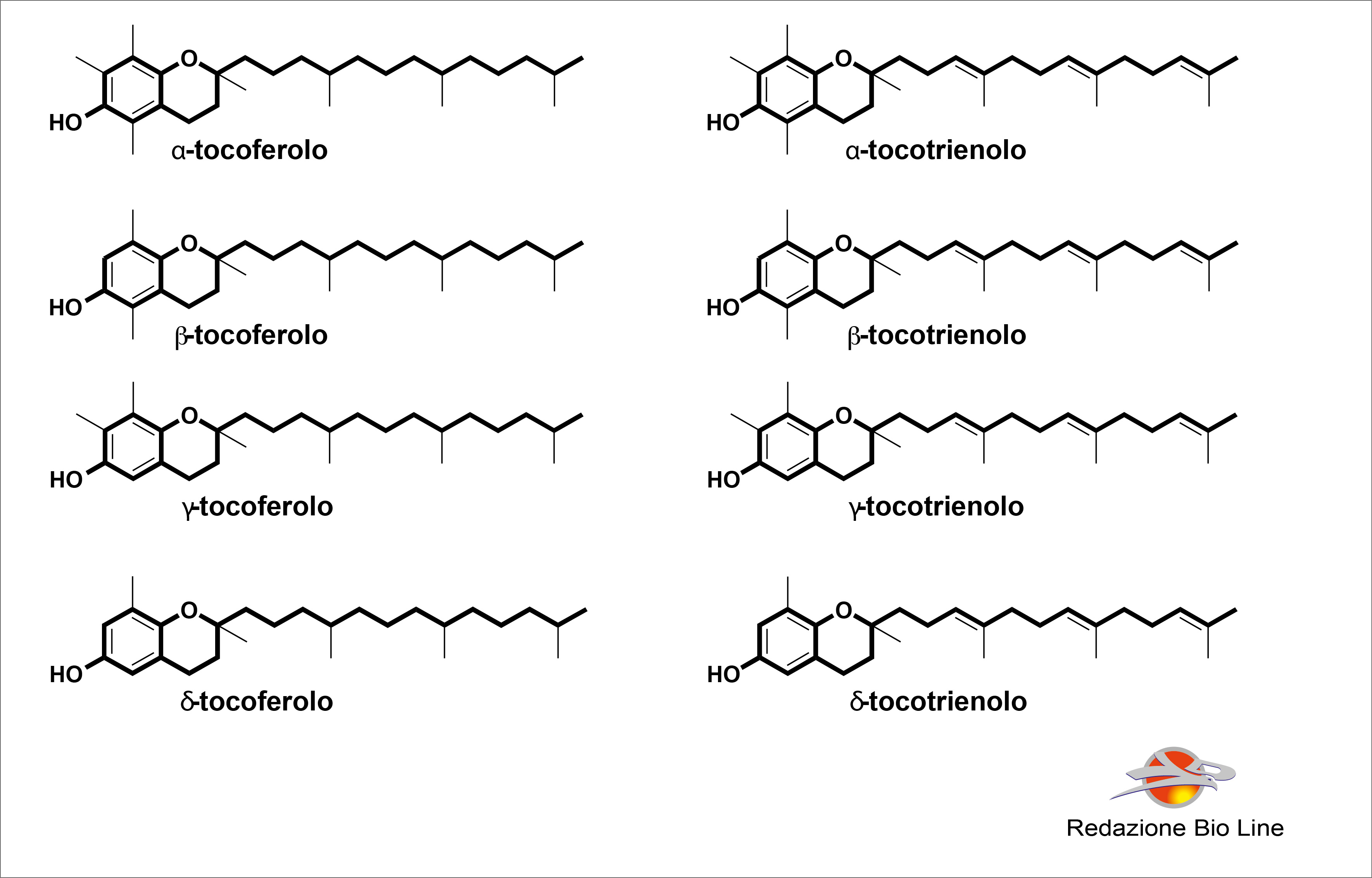 L'α-tocopherol it is the form of vitamin E most frequently found in plant-based foods. Tocopherol esters are very stable and occur naturally in the form of α-tocopheryl acetate.

The a-tocopheryl acetate introduced into the body with food, is transformed into a-tocopherol by pancreatic enzymes, and subsequently absorbed in the middle section of the small intestine, in the presence of bile salts.

Intestinal absorption is partial, i.e. only 50% of the a-tocopherol content introduced with the diet enters the blood and lymphatic vessels, the remaining part is expelled with the faeces.

When tocols enter the blood, they bind to plasma proteins and are distributed throughout the body, preferably accumulating in high-fat tissues, such as adipose, adrenal and testicles.

Sources of vitamin E from food

Like most vitamins, vitamin E also cannot be synthesized by our body, but must be introduced with food, as it is essential for the numerous vital functions of our cells. The total content of vitamin E varies from 3.4 to 8 grams in the adult; at the cellular level the maximum content of vitamin E is found in the cell membrane. 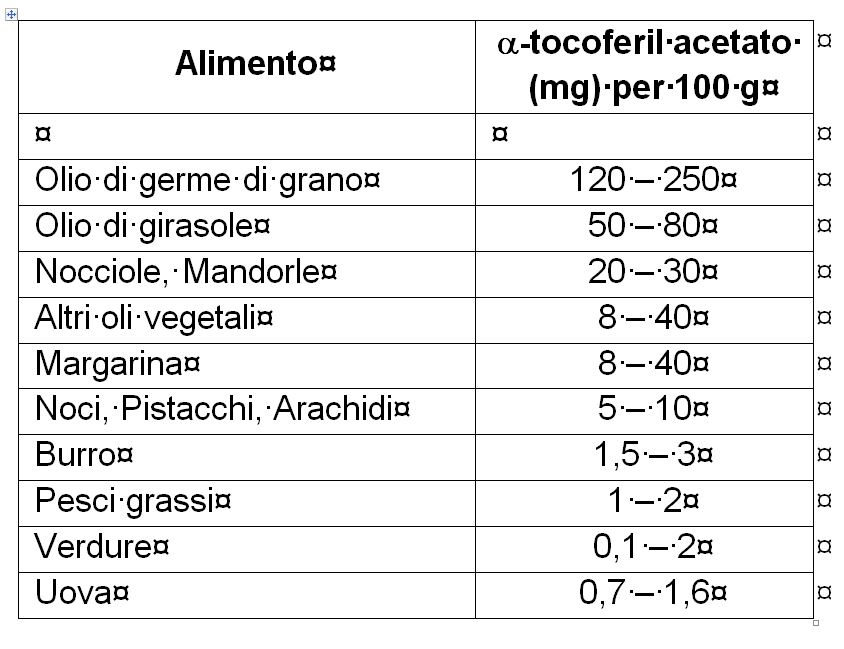 Tab. 1 - Food sources and content of α-tocopheryl acetate per 100 g

What are the main effects of vitamin E?

Vitamin E is among the most important antioxidant molecules. Among the main molecular mechanisms is the ability of tocopherols and tocotrienols to stabilize cell membranes, with which they bind and regulate their permeability.

Compared to tocopherols, tocotrienols are 40-60 times more effective in preventing lipid peroxidation; this effect is attributable to a greater efficiency of the recycling of the chromanilic radical and to a better interaction with the constituents of the cell membrane; in particular, d-tocotrienol has a higher bioavailability than all the other tocols; it also exhibits greater neutralization efficiency of radical species due to the lower number of methyl groups linked to the chromanilic ring.

The main functions of vitamin E are:

- Antioxidant function: during the oxidation processes that take place in the cell, oxygen produces free radicals which attack the unsaturated fatty acids of the membranes and form oxidized derivatives. Free radicals are molecules that contain an odd number of electrons; these are very reactive chemical derivatives, with a very short life (less than a millisecond), as they seek another electron to pair up. Vitamin E, in the course of redox, donates a hydrogen atom to the radical species, thus making them more stable and less reactive towards cell membranes. The reaction thus occurred produces the a-tocopheroxy radical, rather stable, and can regenerate the a-tocopherol, reacting with other antioxidant substances such as C vitamin, the glutathione or the coenzyme Q10 (Wang and Quinn, 1999).

- Cardio protective effects: in vivo experiments have shown that vitamin E induces an improvement in the clinical picture of atherosclerosis and can prevent the genesis of the arteriosclerotic phenomenon (Black and colleagues, 2000). This effect, more marked in tocotrienols rather than in tocopherols, can be exploited in the prophylaxis of cardiovascular diseases and myocardial infarction. Coronary heart disease is often associated with an increase in plasma levels of total cholesterol, and in particular LDL. Tocotrienols also act at the level of cholesterologenesis (endogenous production of cholesterol), inducing a lowering of the total levels of LDL, the so-called "bad" fats (Qureshi and colleagues, 1995).

- Neuroprotective effect: reactive oxygen species, free radicals and, more generally, many oxidative events are at the basis of important disorders affecting the nervous system, including Alzheimer's and Parkinson's diseases; tocopherols and tocotrienols, thanks to their powerful neutralizing effect against free radicals, act as prophylactic against these neurodegenerative diseases, preventing them (Bramley and colleagues 2000).

- Effects on bone metabolism: cigarette smoking is considered a risk factor for the development of osteoporosis, a disease that causes increased bone fragility. Food supplements of vitamin E reduce nicotine-induced bone loss and stimulate the formation of the same, reducing bone fragility, especially in postmenopausal women (Hermizi and colleagues, 2009).

- Gastroprotective effects: based on studies conducted on animal models, it is shown that vitamin E is able to preserve the levels of gastric acidity and gastrin altered by stressful situations. Both tocopherols and tocotrienols, due to their antioxidant nature, have a gastroprotective effect against the damage caused by free radicals, produced precisely in conditions of stress (Azlina and colleagues, 2005).

- Antitumor Effects: numerous studies have shown that vitamin E can have an antitumor action by inducing apoptosis of tumor cells in epithelial carcinoma. One study has highlighted the antiproliferative effect exerted by tocotrienols through the degradation of cyclin D and the consequent block of the cell cycle (Wada, 2005).

The antitumor action of vitamin E is also manifested through the reduction of neoplastic dissemination: several studies show the potential of these substances to stop the metastatic process (Miyazawa and colleagues, 2004).

Furthermore, the antioxidant effect of vitamin E can prevent genomic damage caused by the toxic action of free radicals against cellular DNA; a mutation in cell proliferation regulatory genes can increase the likelihood of carcinogenesis.

- Azlina MF, Nafeeza MI, Khalid B A. A comparison between tocopherol and tocotrienoleffects on gastricparameters in ratsexposed to stress. Asia Pacific Journal of Clinical Nutrition. 2005; 14: 358-65.