Vitamins ACE: eye health, which ones are good for and why

In this article we will talk about how optimize there health of eyes taking care of thesupply.

Even diet, in fact, can play an important role in to prevent the decline of visual function.

This aspect mainly affects the problems due to oxidative stress and aging; it can do nothing in the case of serious and primary pathologies, even worse if hereditary and regulated by mechanisms independent of the environment and behavior.

That said, as we will explain better below, the vast majority of functional complications respond very well to prevention and specific therapy, to an extent even close to 80%.

We will talk, in particular, about nutrients indispensable to the visual mechanism and above all those effective in the fight against oxidative stress, endowed with the now famous ability anti-aging. 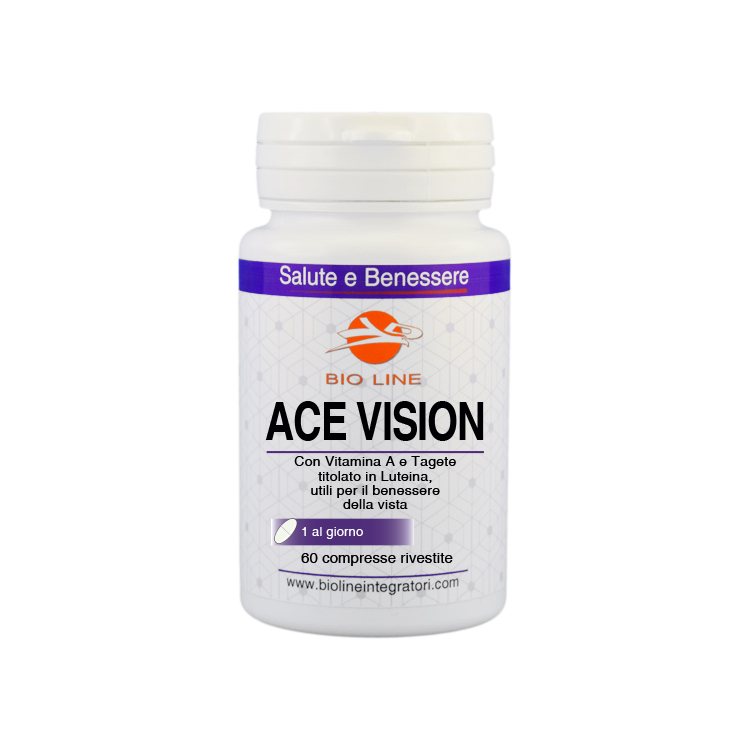 The large numbers suggest that, in the world, beyond 250 million of people suffer from vision problems - with a prevalence of the over 50s, the under 16s, the low income groups and the least developed countries. Only 36 million people are affected by total blindness, even if L'World Health Organization expects an increase of 320% in just 30 years.

The problems of low vision mainly depend on the state of eye healthrather than from primary nerve pathologies. This is why scientific research is continually engaged in investigating the pathological mechanisms, the preventive and therapeutic strategies useful for reducing this "gigantic" problem.

Yes because, apparently, prevention is therapy specification they would be capable of reduce of80% eye diseases - with differences obviously related to the type of problem.

At the center of attention we see the so-called pathologies chronic and not treated (for correction or surgically operated), because ignored and abandoned to the inexorable aggravation.

It is a fact, however, that the main risk factor is theaging. Fortunately, since the average age is constantly increasing (with the exception of the COVID-19 pandemic glimpse), the only way to counter this trend is get in the way the effect "aging".

How? By correcting it style of life and thesupply. In the first case by breaking down i factors of risk environmental, behavioral and intervening early thanks to a early diagnosis; in the second, ensuring the supply of antioxidant and anti-aging nutrients - in particular those that specifically exert an effect protective on the view.

In this article we will talk about these nutrients, which are essentially molecules vitamins or not pro-vitamins but related, useful for eye health: vitamin A, Lutein, C vitamin is Vitamin E.

Vitamin A - more precisely, we are talking about the said chemical form retinaldehyde - it is a fat-soluble molecule (it is diluted in fats) distributed both in foods of vegetable origin and in those of animal nature.

Endogenously, vitamin A can be obtained from equivalents or precursors pro-vitamins, such as α-, β-, γ-caroteme, and lycopene.

Vitamin A has many functions, among which an admirable biological role in the correct mechanism of ocular functioning, with particular reference to the so-called twilight view or scotopic.

By twilight or scotopic sight we mean that which allows you to see in conditions of scarce brightness or even in the night; such is supported by the action of the rods of the retina and, to a small extent, by the cones - two microscopic components of the eyes.

In addition to this, it has a strong antioxidant and protective function on cell membranes, preventing their decline due to oxidative stress and therefore aging.

It is therefore no coincidence that its deficiency determines the alteration of the visual adaptation capacity in conditions of significant variations in light intensity. This would be due to the decrease in the concentration of rhodopsin (limb protein) in the rods mentioned above.

Lutein (as well as zeaxanthin and canthaxanthin, but al contrary of carotenes and lycopene) is a carotenoid not pro-vitamin A; more precisely it is a xanthophyll fat-soluble pigment contained in both animal and vegetable foods.

Concentrating in the macula, that is, in the central area of the retina of the eye, lutein absorbs natural blue light protecting from UV rays harmful.

Lutein proves effective in the prevention of age-related macular degeneration, worsening with excessive exposure to the glaring light of the sun. Other risk factors for the same are: cigarette smoking, genetic predisposition and nutritional imbalances (such as lutein deficiency).

Age-related macular degeneration, which increases a lot with age, is responsible for a progressive loss of function of the retina. Over 55-65, even in industrialized countries, this is the main cause of visual degeneration without remedies.

Lutein is also present to a lesser extent in crystalline, which is why it seems that it can also protect the eyes from the onset of cataract (clouding of the lens itself).

Above we specified that, although it is a carotenoid, lutein not is a pro-vitamin A; this is a very important concept for understanding the article. In fact, if from pro-vitamin carotenoids it is possible to synthesize vitamin A, with lutein this not it can happen.

This means that the diet must be rich in both retinol or its equivalent as pro-vitamin precursors, but also in lutein, because the body is unable to obtain one from the other or vice versa.

Mother's milk provides significant quantities of it and, theoretically, non-negligible concentrations could be found in the animal liver and egg yolk raw - obviously, given the poor applicability of the latter in the diet, their impact on the total amount of vitamin C is almost irrelevant.

The functions of vitamin C are truly numerous. Participates in the integrity of the immune system, it is necessary for the synthesis of collagen etc. but, above all, it exercises a power antioxidant formidable.

It is thanks to its antioxidant properties that Vitamin C can promote eye health. It contrasts i free radicals protecting the ocular tissue from some degenerative pathologies such as, for example, the glaucoma, age-related macular degeneration or cataracts (which we talked about above), which can develop especially with advancing age.

However, given its extreme "delicacy" (cooking, oxidation, old age, etc.), vitamin C is often subject to food supplement. In fact, not everyone is able to consume at least 4 portions of fresh fruit and vegetables daily, which is why countless anti-aging products or simply antioxidants or designed to strengthen the immune system contain it.

The type of vitamin E that is biologically active for humans, or the form that can be absorbed and used by the body, is theα-tocopherol.

Present above all in the "living" portion of the seeds, or in the germ or embryo, in the relative oils extraction cold and well preserved, in the fruit and in vegetables fresh, vitamin E is one of the rarest and most valuable nutrients in the diet.

The functions of vitamin E are primarily of nature antioxidant. Together with vitamin C, with which it collaborates at the metabolic level in the fight against oxidative stress of the tissues, it is the main defense against cellular aging.

Just like lutein and vitamin C, vitamin E is also considered an excellent ally in the prevention of age-related macular degeneration and cataracts.

Nonetheless, vitamin E could to decrease the acute severity of reticular fibroplasia, strengthen eye muscles and prevent blurring of vision from other causes. Furthermore, it is not excluded that its deficiency may contribute to the detachment of the retina.

Eye health is closely linked not only to different lifestyle habits, but also to the composition of the diet.

A deficiency of antioxidants, especially of a vitamin and vitamin-like nature, would be implicated in the statistical increase of ocular complications.

Especially in the long term and for preventive purposes, the integration with products that contain vitamin A, C vitamin, lutein is Vitamin E it could help in reducing the risk of onset or worsening of some degenerative diseases of visual function, improving eye health.