Widely prescribed and used in Italy, nimesulide has been discontinued in many European states due to irreversible liver damage caused by severe adverse reactions. Here's what you need to know when taking this drug.

Nimesulide is also known under the trade name Aulin®, Mesulid® or Sulidamor®.
Nimesulide belongs to the class of NSAID drugs (Non-Steroidal Anti-Inflammatory Drugs), mainly used in therapy for its good pain relieving and anti-inflammatory effect. The drug is prescribed to treat osteoarticular pains, pains from muscle trauma (strains or tears), for primary dysmenorrhea and menstrual pain.

Brief history of the drug

Nimesulide was first synthesized by the multinational 3M in the United States as an experimental drug for the treatment of cancer, but the poor safety profile, when administered at the doses necessary to achieve this effect, led the company to give up the company. . 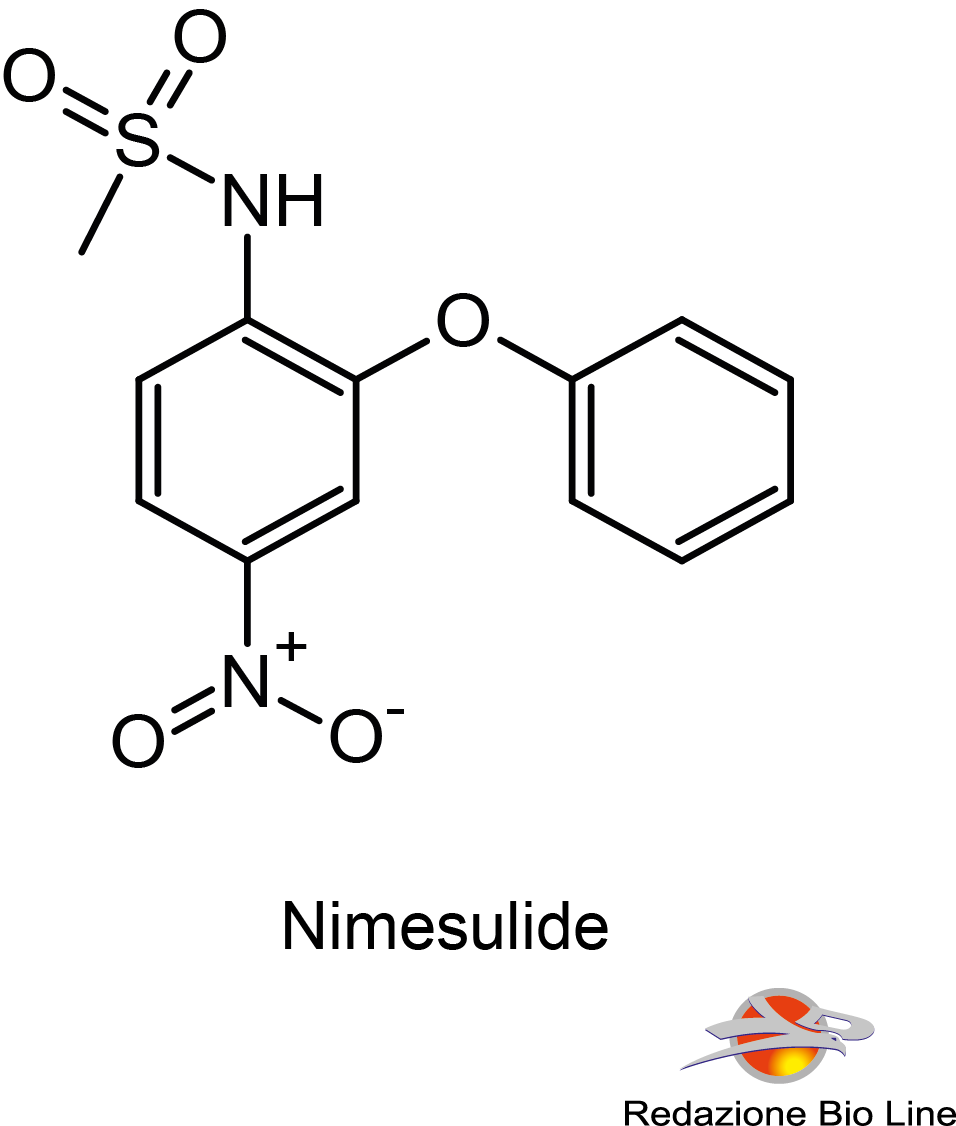 The drug was thus destined for anti-inflammatory therapy and sold to the Swiss company Helsinn Healthcare SA which in turn licensed it to Boehringer Mannheim under the name of Aulin® in 1985.

In 1985 Boehringer Mannheim quickly obtained marketing authorization from the Italian Ministry of Health and Italy was the first state to distribute nimesulide on pharmaceutical counters, from whose sales a turnover of almost 40 million was generated. euros per year in the early 2000s.

After 1985, nimesulide was approved in 50 other states, but the United States, which synthesized it for the first time, Great Britain, Canada, Japan, Australia and New Zealand never approved the use of this drug due to severity. adverse reactions.

In 1998 Boehringer Mannheim was acquired by the Swiss pharmaceutical company Roche.

Following the numerous reports of serious adverse reactions occurring in conjunction with the use of nimesulide, such as intolerance, allergy or violent idiosyncratic manifestations, the health authorities of each nation have reviewed the safety profile and the risk / benefit ratio of the drug to arrive, in some countries, the temporary suspension of the drug or its permanent withdrawal from the market.

The data included in Table 1 show that hepatobiliary disorders are the third most frequent cause of adverse reactions (ADR) associated with the use of this drug. 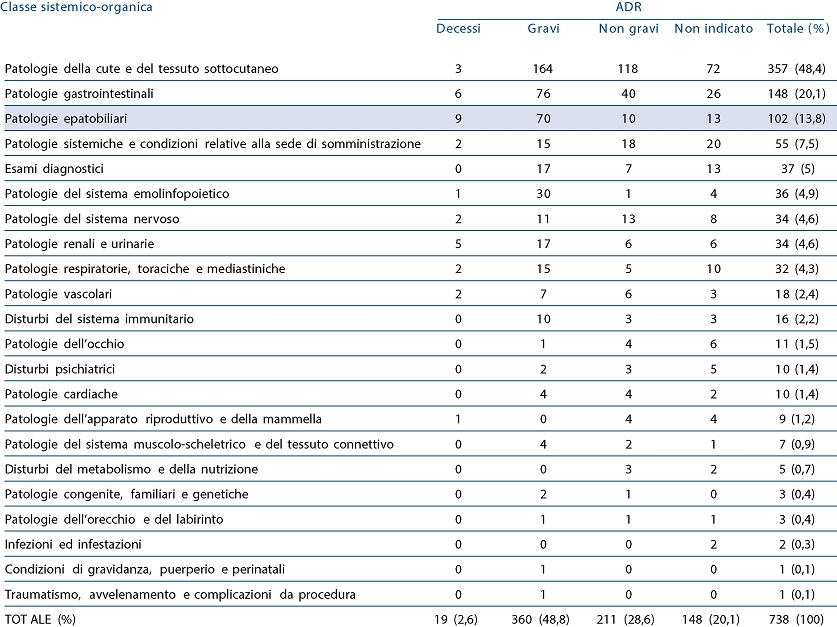 One hundred and two reports concern hepatobiliary reactions: of these 9 cases were fatal, 70 severe, 10 non-serious, and in 13, severity was not reported. Regarding the type of liver disease following the use of nimesulide, the main serious reactions reported were acute hepatitis (31), hepatitis (15), cholestatic hepatitis (12), fulminant hepatitis (6).

The use of nimesulide in most cases was of short duration (1 to 8 days), exposures above a month were very limited.

In 20 severe cases, other drugs suspected of causing the reaction were reported in addition to nimesulide, while concomitant use of other drugs was reported in 29 reports. In both cases, the drug nimesulide was often associated with other drugs potentially capable of causing liver toxicity such as paracetamol, macrolide antibiotics or other NSAIDs (Source: AIFA, Information Bulletin on Drugs 3/2007).

Despite these evidences, on May 20, 2007 in the EMEA (European Medicines Agency), it was the vote of Italy to save nimesulide from the withdrawal from the market of the drug.

Nimesulide or other NSAIDs?

From the analysis of the pharmacovigilance results evaluated by the experts of the AIFA (Italian Medicines Agency) it emerged that nimesulide does not have a safety profile higher than that of other NSAIDs, but on the contrary it has a lower profile of hepatic tolerability.

Furthermore, since nimesulide is an NSAID, all the other side effects typical of NSAIDs are borne by this substance, such as peptic ulcers, perforation of the gastric and duodenal mucosa or gastrointestinal haemorrhage, sometimes unfortunately fatal, in the elderly.

However, nimesulide is more selective for COX-2 than for COX-1 (see NSAIDs and mechanism of action), and therefore has less negative impact on the gastroduodenal mucous membranes, reducing the number of hospitalizations for gastric bleeding.

According to an Italian study conducted by Venegoni and colleagues (2010), through a simulation, the expected number of hospitalizations for liver disease and for gastroduodenal bleeding in Italy, in 2006 and 2009, taking into account a possible shift of nimesulide prescriptions to other non-steroidal anti-inflammatory drugs (NSAIDs). The expected frequency of hospitalization before and after the restrictive measures adopted by the European Medicines Agency (EMEA) on the use of nimesulide was calculated based on data from two other epidemiological studies.

Other side effects caused by the use of nimesulide are: nausea, vomiting, diarrhea, flatulence, constipation, dyspepsia, abdominal pain, ulcerative stomatitis, exacerbation of colitis and Crohn's disease. Gastritis has been observed less frequently.

According to current medical prescriptions, to reduce undesirable effects and the occurrence of adverse reactions with the use of nimesulide, the minimum effective dose should be used and for the shortest possible time. The maximum duration of treatment is 15 days at a dosage of 100 mg twice daily. The decision to prescribe nimesulide should be based on an assessment of the patient's overall individual risks.

Hepatic toxicity due to nimesulide

Liver damage is reported by histological examination and shows as centrilobular necrosis.

Raids of eosinophils are reported especially in the early stages during the onset of damage. Both the immunological and idiosyncratic mechanisms are involved in the genesis of liver damage; Toxicity reactions are likely to involve some metabolites of nimesulide activated by liver enzymes and an immunological syndrome as part of the metabolic reactive syndrome. Unfortunately, as in many cases with other drugs, there is a lack of experimental data that sheds full light on the mechanisms of nimesulide toxicity.

PrevPREVIOUS ONEAntibiotics: take only when needed!
FOLLOWINGCannabis: effects in the body and clinical applicationsNext
LEAVE A COMMENT