Cannabis: effects in the body and clinical applications

Cannabis is a plant containing numerous active ingredients, including THC, which have been used since ancient times for its effect on the body. This article will describe the pharmacological effects of the active ingredients of cannabis and the use in clinical practice of the drug Sativex Spray in Italy, derived from cannabinoids.

Pharmacology's interest in cannabinoids was born with the discovery of tetrahydrocannabinol (THC), a chemical compound contained in the plant species Cannabis sativa. This natural substance is responsible for powerful effects on the human organism when introduced by inhalation through the combustion of the dried leaves and inflorescences of the plant.

THC mediates its effects within the body through the activation of specific biological receptors, first identified in 1988 in rat brain membranes, and called CB receptors. THC is not the only cannabinoid substance capable of binding these receptors: for example the cannabidiol it is another compound, contained in the inflorescences of the species Cannabis sativa, with properties similar to THC. Furthermore, human cells are able to synthesize hormones, called endocannabinoids, which are able to bind CB receptors. These endogenous hormones, of which the most representative is anandamide, together with the CB receptors, make up the human endocannabinoid system. This physiological system regulates multiple homeostatic functions at the level of the nervous system and the immune system.

The effects of endocannabinoids, THC and other cannabinoids are due to the activation of the receptors CB1 is CB2, which is followed by a powerful cellular response responsible for multiple physiological effects.

The receptors CB1 they are found in adipose tissue and central nervous system, in abundance in the hippocampus (important for the effect of cannabinoids on memory), in the cerebellum (important for the loss of motor coordination), in the hypothalamus (for the control of appetite ), in the substantia nigra, in the dopaminergic pathway of gratification, and in the associative areas of the cerebral cortex.

The receptors CB2 instead they are localized in the main lymphoid organs, spleen, tonsils and thymus.

On the other hand, we do not have a significant presence of receptors THC at the level of the cardiovascular and respiratory systems and the brainstem, and precisely for this reason in the event of an overdose of THC we will have a low toxicity on cardiac and respiratory functions.

The effect of the THC, taken through the combustion of cannabis, takes about an hour to manifest, and lasts about 2-3 hours. A small fraction of THC is converted into the more active compound 11-hydroxy-TCH, which contributes to the pharmacological effect of smoking.

Cannabinoids are lipophilic substances, that is, similar to the body's fat. They accumulate within adipose tissue (the tissue where energy reserves in the form of body fat are located) and are released slowly over several days even after a single administration. The withdrawal syndrome due to the acute withdrawal of the substance causes mild or almost no symptoms, thanks to the slow and constant release of cannabinoids from the fatty tissues of the body. Sometimes, withdrawal symptoms are very similar to those of alcohol and opiates, and cause nausea, agitation, irritability, confusion, tachycardia and increased sweating.

The effects of THC can be both on the central nervous system (central effects) and on the peripheral tissues (peripheral effects).

– Decreased motor coordination and ability to drive: Cannabis users are less prone to road accidents than alcohol users, as the lack of perception of danger and recklessness caused by alcohol abuse are often the cause of road accidents. However, the driving skills of the vehicles are equally compromised;

– Feeling of well-being and relaxation, similar to the effects given by alcohol, but without recklessness and aggression;

– Feeling of lack of awareness, with sounds and visions that seem more intense and fantastic. These effects are very similar, but less intense, to those produced by the psychotomimetic drug lysergic acid diethylamide (LSD). Time passes more slowly, and the feelings of alertness and paranoid delusions, which are common with LSD, rarely occur with cannabis. However, there is evidence that chronic cannabis use is more associated with the development of psychiatric diseases such as schizophrenia and bipolar disorders.

– Vasodilation, particularly marked on the vessels of sclera and conjunctiva, producing the classic redness of the eyes of cannabis smokers; 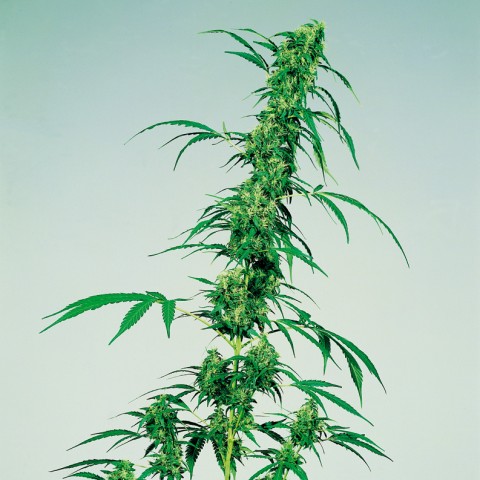 Cannabis sativa it is an annual herbaceous plant that can reach up to 2 meters in height. The plant has an erect, simple or branched stem, rich in hair. The leaves are petiolate, rough and palmate (with lanceolate and serrated lobes). The male axillary flowers are pendulous, while the female ones are erect and smaller.

The inflorescences are collected just before flowering (in April) and above all with these the main varieties of the drug are prepared:

Countless glands spread throughout the plant secrete a resin rich in THC, which comes in the form of brown masses with a characteristic odor, from which thehashish. The latter is obtained through the extraction with alcoholic solvent of the parts of the plant containing glands and resin, or inflorescences (especially female) and leaves (both male and female) and drying. The dry extract is then purified and reduced to powder. The powder obtained is finally pressed and transformed into a semi-solid paste in the shape of sticks or loaves.

Hashish has been used for centuries all over the world: it is the most widely used variety of the drug in Western Europe and has become increasingly popular in the US since the 1970s. Hash is closely related to marijuana, but it is more potent. The greater potency is due to the higher quantity of TCH present in the preparation, which reaches concentrations equal to 10-15%, while in marijuana the concentration is about 3%.

Hashish was described in "The Arabian Nights" by the Roman writer Pliny and by the traveler Marco Polo in "Il Milione". At the time of the Crusades in Syria, in the 12th and 13th centuries, the Crusaders encountered the Ismailiyyah, a Muslim people of ferocious and feared warriors. The Ismailiyyahs were, according to sources, hashish consumers blindly obedient to their political-religious leader al-Hasan ibn as-Sabbah, nicknamed by Marco Polo the Elder of the mountain. These peoples represented an extremist and terrorist Muslim sect, called by the Crusaders themselves haschishiyya, or addicted to hashish, hence the term killer.

The consumption of hashish takes place by means of a water pipe or mixed with tobacco and rolled up. It can also be used for the preparation of food cakes or desserts, but the oral absorption is weaker than the inhaled route of administration.

Hashish can cause a wide spectrum of mental changes, depending on the personality and where the drug is consumed. Frequently, users describe a dream-like fantasy. Distortions of time and space are felt and, rarely, hallucinations. The effects caused by the varieties of the drug obtained from Cannabis sativathey are similar to those induced by oral LSD intake, but less intense and lasting.

Generally hashish causes a sense of well-being (euphoria), increased self-esteem and a feeling of relaxation. Frequently, these mood changes are accompanied by alterations in sensory perception. Distances can appear larger and time intervals can appear longer than they actually are.

Drowsiness and a strong desire for food are sometimes also felt with the use of hashish, unlike LSD, which does not produce the latter effects.

The effects of smoking obtained from the drug varieties are not scientifically known for prolonged periods of time, however, the use of large doses for prolonged periods of time is considered harmful. Characteristics of habitual users have frequently been described as apathy, loss of the ability to think logically, occasional bizarre behavior, and decline in short-term memory.

There are three varieties of in nature Cannabis sativa: indicate, sinensis is foothills; the concentration of psychoactive principles is almost identical in all varieties.

The species Cannabis sativa was cultivated in Emilia Romagna and Campania for the production of a very robust and versatile textile fiber, obtained from the phloem of the plant: the hemp. Hemp was used for the manufacture of coarse and robust objects, such as sacks, tents, ropes, etc. in the early twentieth century. Italian hemp was considered the best quality in the world, while other producing countries were Russia and China. The cultivation of hemp suffered a sharp decline in the mid-1950s in Italy and in the main producing states due to competition from synthetic fibers, the high production and processing costs and the advent of cannabis prohibition. Today cannabis varieties, artificially deprived of psychoactive principles, are grown in France, Russia, China, Hungary, Poland, Romania and Bulgaria, mainly for the supply of cellulose to the paper industry.

The recreational use of cannabis is illegal in almost every country in the world. However, the use of synthetic cannabinoid derivatives for medical purposes is legal in several states such as: Austria, Canada, Finland, Germany, Israel, Italy, Mexico, Netherlands, Portugal, United Kingdom, Spain and USA. The main drugs derived from cannabinoids are:dronabinol, levonantradol, nabilone, nabiximols (also available in Italy). These drugs are indicated for the treatment of nausea and vomiting caused by chemotherapy, to stimulate weight gain in patients with chronic diseases such as HIV and tumors, multiple sclerosis and against neuropathic pain. A wide range of clinical applications for these drugs are being studied, such as glaucoma (to reduce intraocular pressure), head injuries, Tourette's syndrome (to reduce tics, rapid and involuntary movements typical of this disease), disease Parkinson's (to reduce involuntary movements as an adverse effect of L-DOPA). 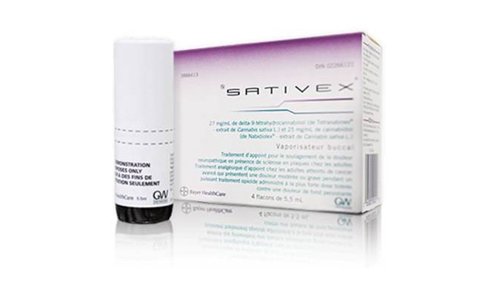 The drug is indicated as a treatment to relieve symptoms in adult patients with moderate to severe spasticity due to multiple sclerosis, who have not shown an adequate response to other antispasmodic medicinal products and who have shown clinically significant improvement in symptoms associated with spasticity in the course of an initial trial period of therapy.

THC and its metabolite cannabidiol, acting on CB1 and CB2 receptors, have been shown, in several clinical studies, to reduce limb stiffness and improve motor function. As a demonstration of the efficacy of these compounds, the effects are inhibited by antagonistic drugs (i.e. with an action opposite to THC) of the CB receptors, while the knockout mouse for the CB1 receptor, i.e. mice lacking the gene that produces this receptor, has a spasticity more serious. In several Sativex studies Spray led to a dose-related reduction in hindlimb stiffness in humans.