Function and diffusion of cholesterol in the body, the main risk factor for the development of atherosclerosis and other problems in adult humans

Cholesterol, a steroid molecule present in our body (Fig. 1), is the best known lipid or fat due to the correlation between high blood levels and cardiovascular disease, while its fundamental function as component of cell membranes, how precursor of all steroid hormones, of the vitamin D and of bile acids. 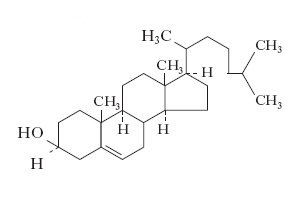 The most of cholesterol it is produced by the liver cells (hepatocytes) which are able to produce it autonomously starting from simple precursors although all the cells of the organism are also able to do so. A small amount is stored inside the hepatocyte, while the remainder is used either for the production of bile acids or introduced into the bloodstream for its use for energy purposes by other cells in the body, such as muscle cells (myocytes).

All the tissues of animals during growth need cholesterol for the synthesis of cell membranes, while the female and male sex glands (the gonads) use cholesterol to produce sex hormones.

How is cholesterol transported in the blood?

All fats, the cholesterol and of triglycerides, due to their chemical nature they are not soluble in blood serum, which is instead aqueous, so to reach the tissues where its presence is required they must be conveyed into the blood plasma by transport proteins with which molecular complexes are formed, the plasma lipoproteins, consisting of a protein part (apolipoprotein) and another part of a lipid nature such as cholesterol and triglycerides.

Lipoproteins are classified according to density (g / ml) which varies according to the composition and the protein and lipid ratio:

THE Chylomicrons they are deputies to the transport from the intestine to the tissues of fatty acids ingested with food, where they will subsequently be used to produce immediate energy or to be deposited as a reserve fuel. Once the fatty acids have been deposited, the chylomicrons return to the liver where they are degraded.

However, when we introduce more fats than necessary, the liver cells bind them to particular transporter proteins, forming the VLDL is LDL.

VLDL and LDL are released into the blood and have the purpose of reaching and depositing fatty acids in the adipose tissue, in the form of an energy reserve.

The LDL, being essentially the transporters of cholesterol, they are known by the term "bad cholesterol" as their concentration is sought as an index of risk of developing cardiovascular diseases, such asatherosclerosis.

Finally we find the HDL, produced by the liver and small intestine, which are high-density lipoproteins, consisting mostly of protein material, denser than lipids. They play a very important role in the prevention of cardiovascular diseases because they sequester and transport cholesterol to the liver where it will be transformed into bile acids, essential for the digestion of fats.

From a chemical point of view, cholesterol is an aliphatic polycyclic alcohol, and its brute formula is: C27H.45OH. All carbon atoms derive from a single precursor: theacetate.

Its structure with 27 carbon atoms implies a complex synthesis route, consisting of numerous biochemical reactions, which can be summarized in 4 main steps (Fig. 2):

1 Condensation of three acetate units to form the mevalonate, a six-carbon intermediate;
2 Conversion of mevalonate into isoprene units activated;
3 Polymerization of six isoprene units with five carbon atoms to form a linear compound with 30 carbon atoms: the squalene;
4 Cycling of squalene to form the 4-ring nucleus of steroids from which, through other biochemical reactions, the lanosterol, then finally the cholesterol at 27 carbon atoms. 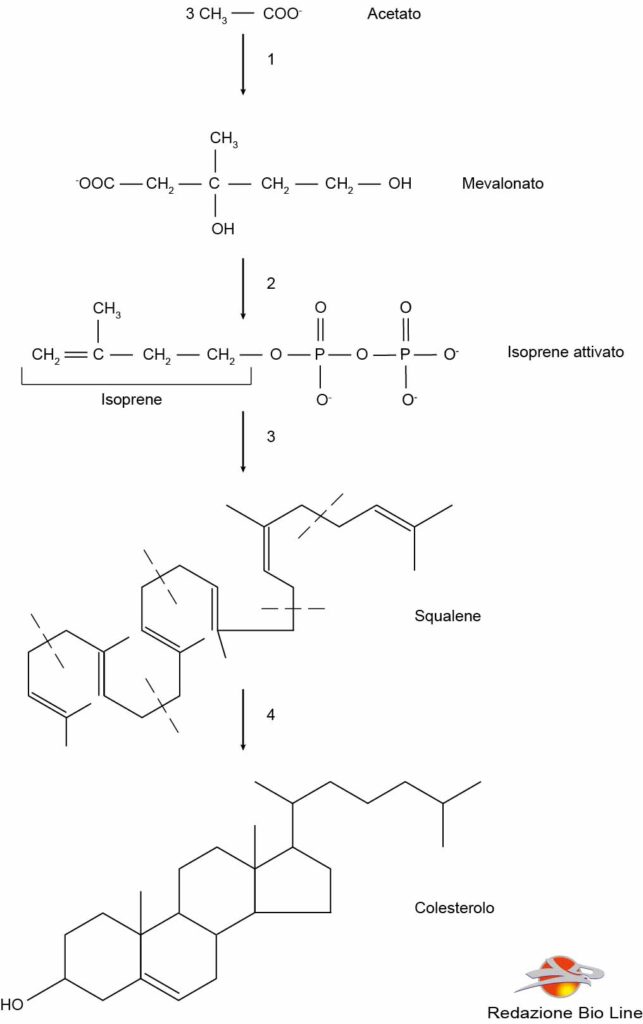 L'atherosclerosis it is the first responsible for two of the three main causes of death in industrialized countries: myocardial infarction and cerebral infarction (stroke), the cause of which may be the uncontrolled production of cholesterol in the body. When the sum of cholesterol synthesized and that obtained from the diet exceeds the amount necessary for the synthesis of membranes, bile salts and hormones, the pathological accumulation of cholesterol in the blood vessels can lead to the formation of atherosclerotic plaques that can clog the arteries.

The atherosclerotic process is very complex and can be considered as a specialized chronic form of inflammation.

Some adhesion proteins attract monocytes and lymphocytes that penetrate the plaque. The cholesterol transported by LDL accumulates in the areas where endothelial damage occurs, and, sequestered by the antioxidant action of the elements circulating in the blood, oxidizes. The oxidation of lipids creates inflammation at the storage site, invoking macrophages and causing the release of inflammatory mediators. The persistence of the inflammation generates the formation of a fibrous capsule that will surround the macrophages and the phagocytosed lipids, isolating the damaged area of the endothelium; the muscle cells migrate into the intimate layer of the artery, towards the lumen of the vessel: they multiply and release collagen, elastin and extracellular matrix, helping to increase the fibrous plaque, while the oxidized lipids and dead cells will be confined to the center of the fibrous plaque . The plaque can continue to grow until the vessel is occluded. Certain conditions such as heavy exercise, severe emotional stress, or illness can destabilize the plaque, causing it to rupture or detach.

Atherosclerotic lesions develop in order of frequency: in the abdominal aorta, in the coronary arteries, in the arteries of the leg, in the descending tract of the thoracic aorta, in the internal carotid artery and in the circle of Willis. Within each district there are also preferential locations of the plates, which can be explained according to the haemodynamic conditions of the blood flow: they are formed especially in the areas where the flow is not laminar, but whirling.