NSAIDs, an acronym for non-steroidal anti-inflammatory drugs, are among the most widely used drugs in the world. They are the classic drugs sold in pharmacies to relieve pain and swelling from inflammation, to reduce body temperature in case of fever and to reduce cold symptoms. They differ from anti-inflammatory drugs of steroid origin (eg cortisone) due to their chemical structure and different pharmacological action.

Many NSAIDs are over-the-counter drugs, therefore dispensed without a prescription. A drug becomes OTC (over the counter) when it meets certain requirements: being on the market for a long time, being safe, and causing minor side effects.

What happens when we introduce these chemical compounds into our body?

NSAIDs, like all drugs, are not exempt from causing serious side effects and unexpected adverse reactions, so they must be used when strictly necessary or for non-prolonged periods.

The main side effects of NSAIDs are due to the mechanism of action and mainly involve the gastrointestinal system, the kidney and the cardiovascular system.

NSAIDs block the production of the common precursor of prostaglandins and gods thromboxanes, through the inhibition of the COX enzyme (cyclo-oxygenase). Prostaglandins are responsible for the symptoms of inflammation (pain, swelling and fever) and thromboxanes regulate the action of platelets (blood clotting).

However, prostaglandins are also useful in the stomach to reduce acid secretion and protect its inner wall. Consequently, blockade induced by NSAIDs can result common symptoms such as: heartburn, indigestion (dyspepsia), diarrhea, nausea and vomiting.

Their use can sometimes cause too very serious damage: haemorrhagic crises, gastric bleeding, gastric and duodenal ulcers and perforations.

It has been estimated that 34-46% of people chronically using NSAIDs suffer from stomach damage, sometimes not manifest (asymptomatic).

Gastrointestinal disorders are the most widespread effects and are responsible, in the United States, for the hospitalization of over 100,000 people a year; about 15% of these people are in danger of dying.

Prostaglandins also play an important physiological role in the kidney by regulating blood flow to the filter system, the renal tubule. Administration of NSAIDs to the elderly, children and susceptible patients can lead to renal failure.

How do NSAIDs work?

Although there are various types of NSAIDs, their effects are generally the consequence of their main action, namely the inhibition of the enzyme cyclo-oxygenase (COX) of arachidonic acid, a precursor of prostaglandins and thromboxanes (Fig. 1).

Fig. 1 - Summary diagram of the mediators derived from phospholipids of cell membranes and the site of action of NSAIDs

Three types of COX (enzyme isoforms) are known, namely COX-1, COX-2 and COX-3. However, the activity of the COX-3 isoform has not yet been clearly ascertained and its physiological role is still being studied.

COX-1 and COX-2 represent the main sites of action of NSAIDs; these two enzymatic forms have a high degree of sequence homology, however there are important differences: COX-1 are constitutive enzyme catalysts, produced by healthy body tissues in the absence of inflammation, which lead to the production of prostaglandins involved in gastric protection , renal and platelet functions.

COX-2, on the other hand, is induced at the site of inflammation by bacterial products and cytokines (other inflammatory mediators), so they are believed to be responsible for the production of inflammation-mediating prostanoids, which cause pain, swelling and fever.

There is a sub-category of NSAIDs called Coxib: Celecoxib (Celebex®) and Etoricoxib (Algix®, Arcoxia®) able to selectively block the COX-2 enzyme, safeguarding the protective action of COX-1 in the stomach and kidney. However, the use of these drugs has come to a halt following the increase in cardiovascular accidents such as heart attack or stroke.

This serious undesirable effect is caused by the imbalances caused in the regulation of the platelet aggregation process, in which both the products of COX-2 (prostaglandins with an anti-aggregating action) and the products of COX-1 (thromboxanes with a pro-aggregating action) are involved: selectively blocking the COX-2 enzyme favors the production of thromboxanes mediated by COX-1, enhancing the platelet action in the coagulation process (Fig. 2). 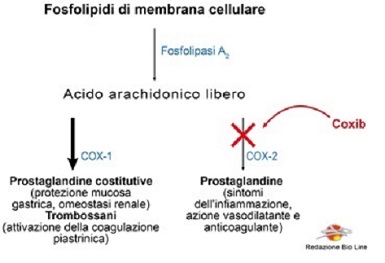 Paracetamol (Tachipirina®) is one of the most widely used antipyretic and painkilling drugs, sometimes not included in the therapeutic class of NSAIDs due to its particular and in some ways still unknown mechanism of action. Paracetamol (or acetaminophen) loses the anti-inflammatory activity and the damaging action at the gastric and renal level typical of NSAIDs. Its pain-relieving and antipyretic action seems to be due to the selective inhibition of COX-3 expressed in the central nervous system.

The name prostaglandins derives from the fact that for the first time they were identified in seminal fluid and therefore considered a product of the prostate. Prostaglandins are hormones (chemicals released by cells to transmit a signal) that act in the immediate circumstances of the release site and are rapidly inactivated by enzymes.

The paracetamol it is considered one of the safest drugs, often also administered to children, used at therapeutic doses of 500, 1000 or 2000 mg per day; however, a high dosage (10-15 grams) can cause irreparable and often fatal liver damage. In the United States, intentional paracetamol poisoning for the purpose of suicide causes numerous deaths each year.

Fortunately, acetyl-cysteine is the antidote.