THE cortisone drugs they are chemically very similar to the hormone hydrocortisone, or cortisol, naturally produced by the glands that surmount the kidneys, the adrenals, and their pharmacological action on the organism is due to this chemical equivalence, in truth very complex.

THE cortisone they are very powerful drugs, in fact small doses are enough to cause an important reaction in the body.

They have an anti-inflammatory effect: they block the production of inflammatory mediators (prostaglandins and thromboxanes, derived from the synthesis of arachidonic acid) responsible for pain, redness and swelling.

Cortisones also have an anti-asthmatic effect, this is because, unlike NSAIDs (F.armaci TOntinflammatory No.onS.teroidei), block other inflammatory mediators such as the production of leukotrienes, which, having a powerful constricting effect in the bronchi, are responsible for the worsening of asthma symptoms and allergic reactions.

The administration of these drugs can take place orally, by injection or through the skin (topically).

What happens when we introduce these chemical compounds into our body?

Cortisone drugs are never completely selective in their therapeutic indication, in fact they significantly intervene in 3 points: in the regulation of the metabolism of carbohydrate-protein-fat macronutrients, in the hydro-saline balance and in the production of some hormones.

- Carbohydrate metabolism: they reduce the uptake of glucose in the blood with consequent hyperglycemia;

- Fat metabolism: they demolish lipid reserves and induce the redistribution of body fat (buffalo hump, round face and increase in abdominal fat).

They alter the hydromineral balance of the organism, in particular, they slow down the absorption of calcium in the intestine and increase its expulsion in the urine.

This effect on calcium, especially if other drugs that cause reduced calcium absorption, such as antacids (e.g. omeprazole) are used at the same time, can lead to osteoporosis, a serious bone disease.

Cortisones also cause retention of sodium (and therefore of liquids) and favor the excretion of potassium.

The therapeutic use of cortisone drugs often generates numerous direct effects even on those hormones in our body that have a structure similar to cortisone. In fact, the organism, in order to save resources and energy, blocks the production of its hormones, recognizing drugs instead of its own hormones; this blocking mechanism is called negative feedback control in physiology.

All the side effects caused by the chronic use of cortisone are manifested in the Cushing's syndrome (Fig.1). 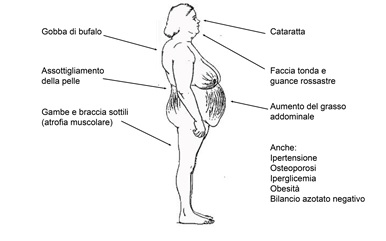 The cholesterol it is the precursor of all the steroid hormones in our body. Depending on the organ in which the transformation takes place from the same cholesterol, the three groups with particular physiological functions originate: imineralocorticoids (Aldosterone) ei glucocorticoids (cortisol-hydrocortisone), which have the function of regulating the hydrosaline balance of the body and the metabolism of nutrients, as explained in Fig. 2, and the sex hormones (Testosterone, Progesterone and Estriol) which regulate the menstrual cycle and the maturation of the gonads during puberty.

Fig. 2 - Classification of hormones based on the biosynthetic pathway of origin

How do cortisone drugs work?

Endogenous steroid hormones pass cell membranes by passive diffusion and interact with specific receptors located inside the cell. The ligand-receptor complex thus formed binds to DNA, causing an inductive or repressive effect on the expression of some genes and therefore on the production of functional proteins by the target cells.

Fig. 3 - Site of action of cortisone drugs and NSAIDs

NSAIDs should not be used by asthmatic patients because they shift the balance that regulates the arachidonic acid cascade on the production of leukotrienes, causing a worsening of asthma symptoms (Fig. 3).

Asthma is an inflammatory condition characterized by a recurrent and reversible obstruction of the airways, which occurs following irritating stimuli. Cortisones in particular are useful in preventing the progression of chronic asthma and are effective in acute severe asthma. Furthermore, these drugs are able to increase the expression of b receptors2- bronchial adrenergic, the stimulation of which induces the relaxation of smooth muscles and therefore bronchodilation. For this reason, in the treatment of asthma, cortisone drugs are administered in association with drugs  b2-agonists, i.e. drugs that activate the b receptor2-adrenergic, such as salbutamol (Broncovaleas®, Ventolin®) or salmeterol (Seretide®, Arial®).

To carry out an immunodepressive action, cortisone drugs cause a significant reduction in the activity of the cells of the immune system; this effect in particular is caused by the gene block of the production ofinterleukins and their receptors on white blood cells. Interleukins are a category of peptides, released during inflammation, which coordinate the action and intervention of the cells of the immune system.

Immunosuppressive action is required following organ transplantation, to avoid an autoimmune reaction against "foreign" tissue. However, a depression of the immune system causes side effects such as candidiasis and increased exposure to bacterial and viral diseases.

The term interleukin comes from the English interleukin, compound name of inter (action)

In asthmatic patients, in which chronic use of cortisone drugs is used, administration takes place through inhalation devices or aerosols that deposit the drug in the respiratory tract in which pharmacological action is required, avoiding (or reducing) all the side effects caused by an oral therapy, in which the drug is distributed throughout the body.