Vitamin D: what it is used for and what are the causes and symptoms of a deficiency

What is it for

They are meant for vitamin D, in its vitamin D2 forms and vitamin D3, those vitamins having an action against rickets, that is a serious disease of children that causes mental retardation and ossification disorders.

It is known that the main function of vitamin D is that carried out at the level of the bones; in fact, it favors the deposition of calcium in the bone tissue, a supporting connective tissue characterized by considerable hardness and resistance. In fact, severe deficiencies of vitamin D cause diseases such as osteomalacia and osteoporosis in adults, characterized mainly by weak bones.

Vitamin D also regulates the absorption of the minerals calcium, magnesium and phosphorus from foods present in the intestine. These minerals, in addition to being components of the bones, regulate the osmotic balance of our body, favor intercellular communications, regulate the pH of extracellular fluids.

Less known to the public is the function of vitamin D on the immune system, it determines the growth and formation of macrophages starting from myeloid precursors, inhibits the synthesis of immunoglobulins and stimulates platelet aggregation. Although they have not yet been confirmed by scientific evidence, some studies hypothesize that the administration of vitamin D in patients infected with the Covid 19 virus would lead to a decrease in the inflammatory response and an improvement in the clinical picture of the infected.

Both vitamins D2 and D3 taken with food are transformed into the prehormone calcidiol (25-hydroxycholecalciferol), which in turn is transformed by the same liver and kidney enzymes into the active hormone calcitriol (1,25-dihydroxycalciferol or 1,25- (OH)2D). The latter penetrates the cell membranes of target cells and interacts with its own receptors located near the cell nucleus, activating them.

There is another very important biosynthetic way through which man synthesizes vitamin D: through exposure to sunlight. In detail, this synthesis pathway originates from provitamin dehydrocholesterol, a chemical compound similar in molecular structure to cholesterol, since it is derived from it. Dehydrocholesterol is one of the components of our skin and is transformed into cholecalciferol (vitamin D3) by the action of the sun's UV rays.

Please note: to promote a significant endogenous production of vitamin D it is necessary to expose the 70-80% of the skin surface for about 30-40 minutes to the sun.

Interestingly, there are conditions that limit vitamin D biosynthesis: 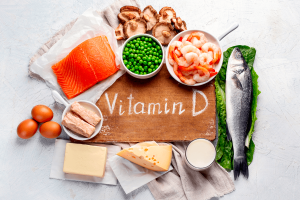 According to Regulation (EU) no. 1169/2011 of the European Parliament and of the Council of 25 October 2011, the recommended vitamin D consumption is 5 mg of vitamin D. Under normal conditions, good exposure to the sun and a varied diet is sufficient to satisfy the body's needs for calciferol. However, the doctor can prescribe vitamin D and Calcium food supplements, antioxidant supplements or drugs (Dibase® or Didrogyl®) in case of vitamin deficiency or in case of the presence of risk factors.

The diagnosis of vitamin D deficiency is performed with a blood test, in more detail the prehormone calcidiol is searched for by blood volume:

Vitamin D deficiency can be caused by:

There are also risk factors associated with a greater risk of developing vitamin D deficiency; among the main ones:

Vitamin D deficiency is a devious condition. However serious deficiencies can show a symptomatic picture characterized by:

PrevPREVIOUS ONEBranched chain amino acids: what they are for and when to take them
FOLLOWINGMelatonin: an ally for sleep. Effects, benefits and dosageNext
LEAVE A COMMENT